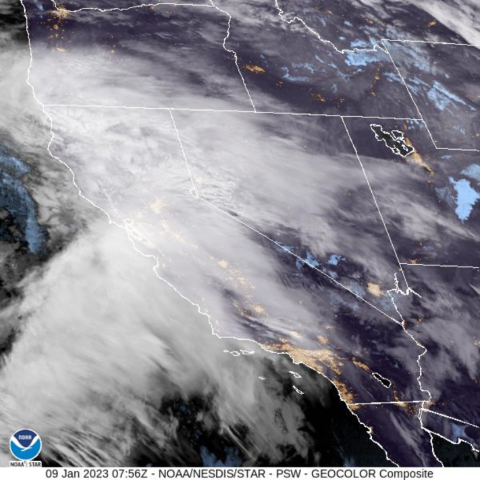 An Atmospheric River flows northeastward across Calif. in this Jan. 9 satellite image
photo credit: National Weather Service
Just a few days ago, Guerneville and just about every low-lying community along the Russian River were on edge, awaiting cataclysmic flooding that thankfully never arrived. A forecast issued Tuesday morning expected the river to jump its banks in Guerneville around 4 pm Thursday. According to a revision Tuesday afternoon, that's no longer the case.
Flooding is still expected in Hopland midnight Sunday. The Napa River isn't expected to see flooding, while the Navarro River will go two feet over flood stage at Navarro Saturday night at 9. Turns out, a lot goes in to making these predictions, and the complexity means their reliability isn't always perfect.
Predicting how a river will behave is similar to compiling a weather forecast, but with a whole other layer of complexity.
Brett Whitin is the Service Coordination Hydrologist at the California Nevada River Forecast Center in Sacramento, part of the National Weather Service.
"We use hydrology to emulate the runoff into the rivers. The Russian River, the main input is precipitation and we process that through our soil hydrology models. We continually track the accumulation of precipitation and how that water moves its way through the soils. Every time we issue a forecast every day, we're kind of starting with initial conditions that we hope are emulating what's going on out there in the watershed."
If reality is diverging from what the models predict, Whitin said new data can be added to the computer model, which may alter the forecast.
Atmospheric river storms, which tend to deliver huge amount of moisture to a fairly narrow area, are extremely difficult to predict. Add in microclimates, and variations in a storm's speed, and there's a whole lot of possible variation.
"The big thing is precipitation. Not only in the amount, but also in the intensity. Let's just say the forecast had two inches over twelve hours, but we ended up getting two inches over six hours. The total is right, but the distribution the intensity was different. Then there's also hydrologic uncertainty too, maybe the initial conditions of the watershed, maybe they are a little bit more wet, a little more dry than what we were starting off with, that can be a factor," Whitin said
How precipitation falls within a watershed factors in as well, he said.
"If it's really localized and intense in one part versus evenly distributed. The basin can react differently, so you might get maybe a faster-rising response, versus evenly distributed precipitation over the whole basin. Travel times, as the water kind of gets into the river and merges with other creeks, sometimes travel times can vary from storm to storm, there are unique things about each storm that can cause the river to react in different ways."
When the National Weather Service issues a warning, the event is almost assured. While that might not be as true for river flood warnings, Whitin says the probability is considerably higher than if no warning is issued, and definitely a sign to seek refuge at higher ground.