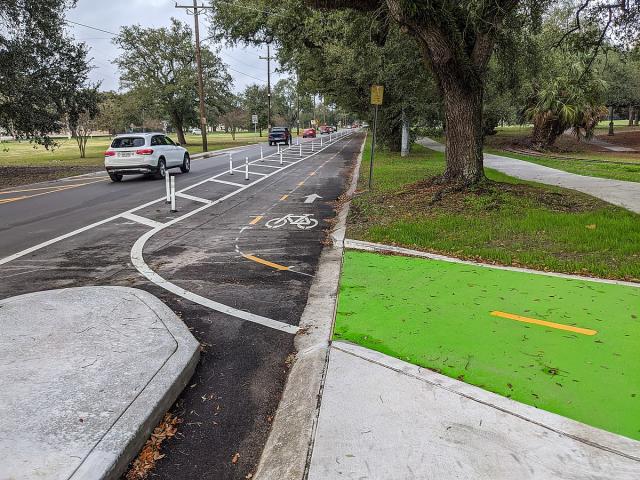 photo credit: Bart Everson/Wikimedia
Each year Santa Rosa takes public input on goals and priorities for the city budget. One group is pushing the city to make good on previous promises.
Cris Eggers is a volunteer with that group: Bikeable Santa Rosa.
"Bikeable is a volunteer group who think that Santa Rosa is ready for a protected and connected bike network so that people who want to ride their bikes to go to places [can], not just the fearless riders," Eggers said. "But we're talking about the other 70% of people who would like to ride their bikes, would like to see their kids riding their bikes to school, but just feel that the city's not set up to do that."
She said the group is calling for bike ways that have a divider between them and traffic.
"It could be a concrete barrier, it could be some bollards, something where there's an actual physical barrier between cyclists and the traffic because cars and bikes don't mix," Eggers said.
Connection is a key aspect, she said.
"So you could be riding on a bike way and then suddenly half a block before you get to a busy intersection the bike lane just stops and you're left to fend for yourself with cars coming in every direction," Eggers said. "And in terms of connection, we're thinking about places where people like and need to go, like kids going to school, or people going to the library or getting to the grocery store"
"Most places that we drive in the city are within two miles of where we live." Eggers said.
Part of Santa Rosa and Sonoma County’s climate adaptation strategies are to increase biking for normal day-to-day transportation.
Eggers said, "there are a sufficient number of people in each of their districts that they need to pay attention to this and they need to put an investment to their commitments because that's what it takes to build infrastructure."
"And currently most of the traffic engineering budget is being spent on widening roads. That is not going to get this done," Eggers said.