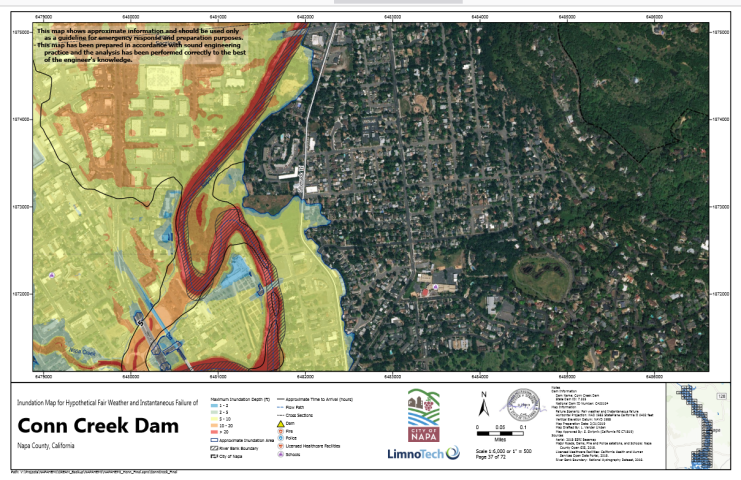 Lake Hennessey inundation map courtesy California Division of the Safety of Dams
photo credit: Large areas of downtown Napa, along with much of the valley would be submerged in a dam failure
There's something of a rare sight to see right now in the hills north of Napa.
Thanks to a string of atmospheric river storms, Lake Hennessey has risen high enough to reach the dam's spillway, something celebrated by more than a few locals.
Joy Eldredge is deputy utilities director for the City of Napa, which owns the reservoir.
"First of all, it hasn't spilled for four years, so we're pretty happy that we have reached the point of spilling, right? On the water supply side, that's a good thing, everyone is welcoming that, at this point."
There's also a dark side. Three quarters of a century old, the dam was rated in 'fair' condition following its most recent inspection. It is considered an 'extremely high hazard,' dam as failure would inundate most of Napa Valley, home to hundreds of thousands of people.
With improvements in weather modeling, the dam was re-assessed... Eldredge said federal officials determined the dam's spillway would be unable to meet the challenge of the biggest possible deluge.
"What happens is NOAA, who does all the climate prediction work...what they have to take into account is the 'probable maximum flood, so what the absolute biggest storm that could ever happen. That's the storm that has a potential to have some issues with our spillway, because our spillway would be exceeded."
That could lead to water pouring over the top of the earthen dam, leading to catastrophic structural failure. The scenario however appears highly unlikely.
"What it boils down to is really if we have forty-two inches within 72 hours, right, then that's what would potentially lead to that situation," she said.
What's predicted right now, even these couple of Atmospheric storms queued up doesn't appear that they are going to be anything close to what might occur for that probable maximum flood.
As cataclysmic as it sounds, Eldredge said if it were to happen, Lake Hennessey would be a footnote.
"The reality is if that happened, there's going to be a lot of other flooding issues going on, that's well beyond a 100-year flood, that most entities design for. It would be a big one and there would be messes all over the place."
Recent federal appropriations to repair and potentially replace the spillway means construction might begin as soon as 2026.