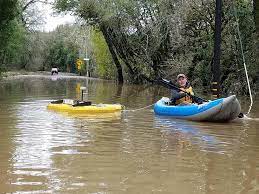 photo credit: Courtesy United States Geological Survey
If you're feeling a little weather whiplash, you're not hallucinating.
The switch from a desiccated landscape to an inundated one has been swift. Officials with the state department of water resources say more storms are on the way. That's after five have slammed into California since late December.
"California is experiencing, coincidentally, both a drought emergency and a flood emergency," said Carla Nemath, director California's Department of Water Resources, at an online press conference Monday afternoon.
Statewide, rivers at nine sites were exceeding flood stage. She said crews have been busy shoring up a levee along the Consumes River. So much rain has fallen up north, that the Sacramento River is pouring over five of six weirs, filling flood bypasses in the vicinity of the state capitol.
Several smaller reservoirs, dangerously low mere months ago, are preparing to dump water once rivers begin to ebb----to make room for runoff from storms later in the season.
"We are working 24/7 to provide support to local flood control districts and county offices of emergency services," Nemath said.
She added that officials in Sonoma County are so-far managing on their own.
Jeremy Arrich, chief of the agency's flood management division, said teams from Sacramento will help if needed.
"We have made high water notification calls, that's part of our normal process here, and we're ready to assist if and when we are needed."
It will take more than the recent impressive rains to ease California's multi-year drought. Both of the state's largest reservoirs--- Shasta and Oroville---are less than half full. Statewide reservoir storage is currently only three quarters of the historical average for this time of year.