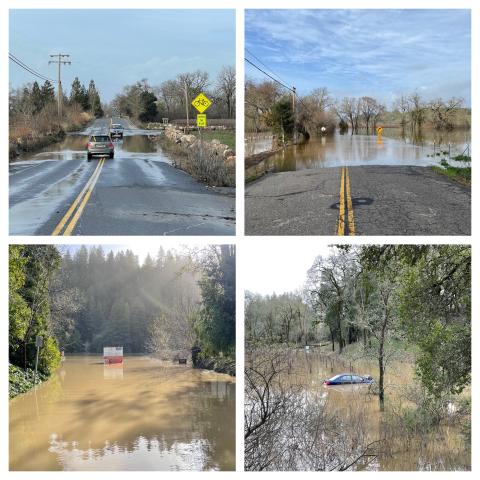 photo credit: KRCB/Noah Abrams
The muddy water keeps flowing and county work trucks keep moving along River Road, but earlier flood predictions failed to materialize on a sunny Monday afternoon in Guerneville.
Pre-staged service trucks remain in place though, while cars and RV’s have been moved to higher ground in spots along River Road. Sandbags barricade the doors of the Monte Rio Theatre in anticipation.
County spokesperson Ted Appel, who was traveling along River Road taking photos of flooded areas Monday afternoon, said the break in the rain has been well utilized.
"There's been a big effort on trying to get crews into place before they're needed so that they can respond quickly, keep roads open, work in conjunction with PG&E to restore power, and all those crews have been out all day today working real hard, and the roads look much better than they did 24 hours ago," Appel said.
Alice Teeter is a representative for Hacienda on the Lower Russian River Municipal Advisory Council. She said lessons have been learned from 2019 for this time round.
"Four years ago we had to all go down to the supervisor's meeting in Santa Rosa and say, 'Hey, can we please get, you know, dumpsters, trash removal, help hauling for people who don't have the wherewithal to get stuff to their curbs, we're going to need people," Teeter said. "So this time, instead of having to go to the supervisors after the fact and say, can we have bins? They're saying, okay, as soon as there's a flood event, we're going to get bins out here."
With more rain incoming this week, Appel recommends residents exercise caution, and he said there’s plenty of resources available.
"We've got community support centers," Appel said. "These are places where you can go and get a comfort kit, that's a place to recharge your batteries on your phone. Get a blanket, get something to eat, get some fresh water, and figure out your next move."
The community support centers are at Fort Ross State Historic Park, the Bodega Harbor Yacht Club, the former Bank of America Building in Guerneville, and the Sonoma Veterans Community Center in Occidental.