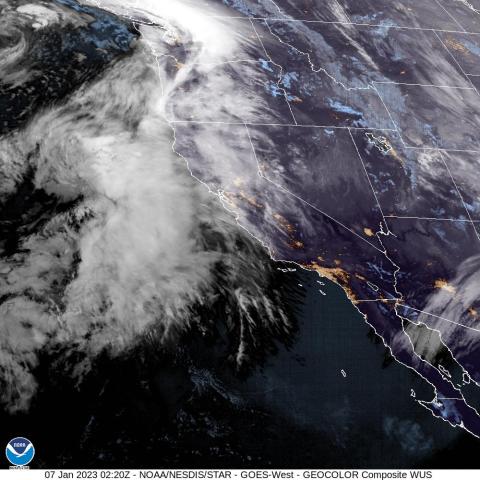 photo credit: NOAA Satellites
This week’s powerful storms battered the landscape and wreaked havoc on power and communications infrastructure.
While this storm wasn’t unprecedented, its impact on trees across Sonoma County was, Johannes Hoevertsz, Sonoma County's Director of Public Infrastructure said.
"Yeah, it was an unprecedented number of trees that went down," Hoevertsz said. "Absolutely overwhelmed everyone with power lines down; there were firefighters, road workers trapped in between trees, so that kind of slowed down the response, but we were going all night. Excellent partnership with Cal Fire and with our fire district."
Hoevertsz said the break in the rain has allowed crews to clear debris and make repairs.
"We've been opening roads, cutting trees," Hoevertsz said. "Geyser's Road, near Cloverdale. It's closed. We have some slides. It's pretty bad. We probably have roughly about four or 5 million dollars worth of damage on that road. So we are getting ready, pausing tomorrow, getting ready for Sunday."
West County remains the hardest hit, Hoevertsz said.
"We have some minor slides in the fifth district," Hoevertsz said. "You know, in the West County there's still a lot of people without powers and no communications. Cazadero has been out of power for two days. They've been communicating with GMRS Radio, which is a project that we've been doing for emergencies and we are super excited as it worked so good."
Hoevertsz said the radio network is critical for Cazadero residents with heightened focus on coming days.
"Comcast died, they cannot call 911, so they're really stranded in Cazadero," Hoevertsz. "They can't get out. So the GMRS radio network has been extremely beneficial for the community. That's the only way that they have to communicate now. You know, we're fully staffed, sandbags and, and sand are being delivered everywhere that we can. Ready to go again on Sunday, Monday, and Tuesday."