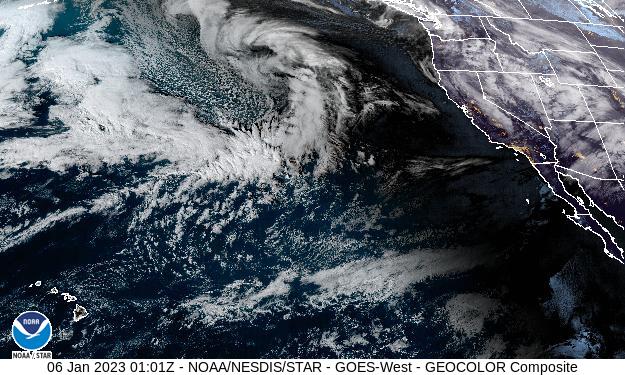 photo credit: NOAA CNRFC
A night of serious rain and wind felled trees and power lines across the North Bay - fatally so in west county.
The current atmospheric river lashed Sonoma County with serious force last night - claiming the life of a two year old in Occidental, according to Sonoma County Sheriff’s spokesman Sgt. Juan Valencia.
"Unfortunately, yesterday at 5:14 PM Fire was dispatched to the 2800 block of Joy Road in Occidental for a two-year-old that was pinned underneath a fallen tree," Valencia said. "A large tree fell onto the mobile home structure, demolishing the structure."
"The father and a neighbor were able to rescue the two year old; fire personnel arrived, they rendered first aid. Unfortunately, the two year old succumbed to his injuries and was pronounced deceased at 5:48 PM."
Valencia said it’s been an extraordinarily busy 24 hours in addition to the child's death in Occidental.
"The Sheriff's office dispatch center, on an average, they received anywhere between 70 to 80 calls for service," Valencia said. "Yesterday they received over four hundred and forty five 911 calls."
He said evacuations along the Russian River remain a possibility as flood predictions shift.
"We do have 15 zones that are under evacuation warning, and that's basically affecting about 13,159 people," Valencia said. "We are watching it closely. We're working closely with our partners at the EOC Center. There's a lot of predictions of what the water's going to do, and it really, it all depends on what the rain's going to do."
"When we do a warning, we want people to understand that there's a lot of time and effort and a lot of work that goes into these."
The latest projection from the National Weather Service is for the Russian River to stay below flood stage this evening, and flood with a peak at 36 feet early Monday morning.
Valencia reiterated common sense safety tips for the moment.
"Keep an eye out for trees that could fall or are falling," Valencia said. "Obviously, don't touch power lines, if they're down, assume they are live."
A Go Fund Me campaign set up to help the parents of the deceased child, identified him as Aeon Tocchini.