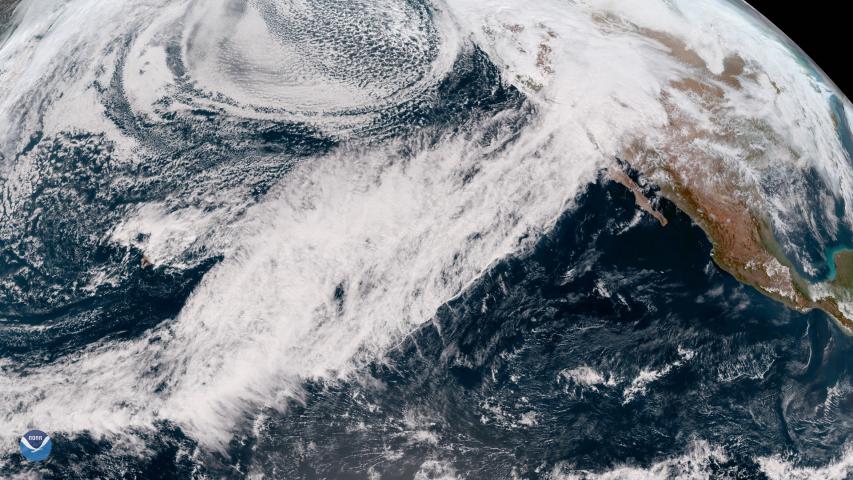 photo credit: NOAA Satellites
Wet weather continues and the forecast calls for serious rain tonight - KRCB News spoke with Rick Canepa, meteorologist with the National Weather Service’s Bay Area office in Monterey about it.
Canepa said a storm of this strength is not unheard of.
"I mean, we quickly reference a benchmark storm back in December, 1995, taking a similar path, similar depth, that one produced widespread heavy rain and damaging winds across San Francisco Bay area," Canepa said. "It leveled something like a thousand trees across Golden Gate Park caused extensive damage. The wind gusts were like over a hundred miles an hour at Angel Island."
Canepa said there has been a recent shift in Pacific weather patterns.
"Since about mid-December through late December the overall large picture across the Pacific has switched to a west to east flow and a strong one at that," Canepa said. "So we're seeing a strong jet stream develop across the entire Pacific basin."
He said those shifts are behind this recent string of rain storms.
"So this is a situation where it's ideal for storm production across the Pacific cause it's the availability of water vapor from the subtropics and the warmth as well and the higher latitude air that's come down," Canepa said. "Basically emptying out across like say the Bering Sea and down across the lower latitudes across the Pacific. So it's that collision of air masses that's ramped up the storm track and that's where we are currently."
Canepa also explained why the Russian River in Guerneville is so susceptible to flooding compared to Healdsburg.
"It's a little bit more exposed to heavier precipitation in the watershed," Canepa said. "Northern Sonoma County is really kind of the focus point for probably some of the heaviest precipitation that we're forecasting."
"So we're going to be seeing five, six inches of rain at least up there, possibly locally, higher amounts, depending exactly how the frontal band sets up. So the North Bay and up into Mendocino County is kind of the pivot point for that frontal passage."