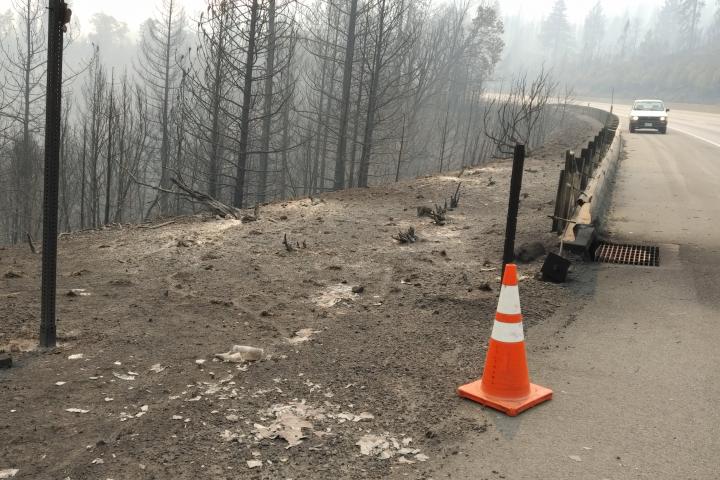 Severe rains are elevating landslide risks across burn scars
photo credit: Marc Albert/KRCB
One of the areas of highest concern during the current storm system is the roughly 70,000-acre footprint of the 2020 Glass Fire primed for mudslides.
Officials are monitoring the area closely. Paul Lowenthal is a division chief and fire Marshal with Santa Rosa Fire.
"It is susceptible to slippage and that could include mudslides, debris flows and rockslides, caused by excessive, high intensity rainfall rates."
That's primarily due to the fire wiping out the trees, shrubs, grasses and their roots, that hold steep slopes in place.
He said crews are keeping a close eye
"We've got city engineers, stormwater and creek staff, public works staff that are pretty familiar with the hillside, know where some of the trouble spots have been in the past, and really, it relies on residents reporting that type of movement to us, stuff like that is critical for us to know about because a small slide could lead to something much bigger."
A major emergency however, isn't expected.
"Slippage could occur at any point in time based on saturation of soils, and or rainfall rates. We are likely to see shallow mudslides, especially with how saturated the soils are, but large scale debris flows in a burn scar would be more dependent on those rainfall rates," he said.
Parts of the region will nevertheless be at a tipping point. Lowenthal said forecasters expect rainfall at a rate of up to three quarters of an inch per hour Wednesday into Thursday along with brief periods delivering twice that.
"Those rainfall rates would put us more at risk. Right now what we're seeing is we feel that most likely we will get more ponding, more nuisance flooding. The primary concern right now, at least in the short term is the winds, and the potential for trees and power lines to come down."
Mudslides could become a bigger threat this weekend, when another strong atmospheric river system is expected.
"With each one of those, our saturation levels continue to max out and the rainfall rate becomes that much more concerning," Lowenthal said.