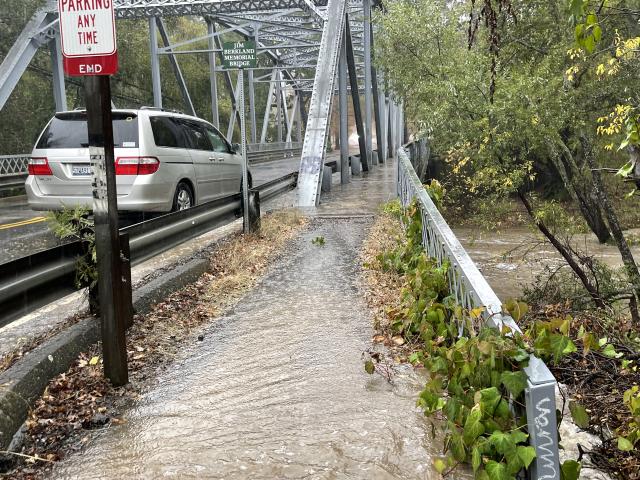 photo credit: Courtesy of Sarah Stierch/Flickr
Johannes Hoevertsz is director of Sonoma County Public Infrastructure - formerly Transportation and Public Works. He told KRCB News people should prepare now for Wednesday’s deluge.
"So if you need sandbags, I would recommend that you go get them now you're probably a little behind, but I think there's still time," Hoevertsz said. "We're expecting the worst of the storm to come Wednesday morning and Wednesday midday."
"I would recommend that people don't travel, for sure, don't cross flooded roads. Turn around, don't drown, we like to say. If you see any trees down or slides or flooding, please report them to our phone number five six five fifty one hundred and we'll have our crews go out and help out with whatever they can."
He said Thursday is the crucial day for the Russian River.
"Heavy rain and wind on Wednesday," Hoevertsz said. "Typically about 24 hours later, we expect the peak in Guerneville, which is kind of midday Thursday, so we'll be ready for that. We're pre-staging materials, equipment, just so we can quickly assist or clear roads should it be necessary."
Rick Canepa, meteorologist with the National Weather Service’s Bay Area office said - as expected - to keep eyes on Guerneville.
"The Russian River at Healdsburg is forecast to be near 17 feet early Thursday morning, right around four or five AM," Canepa said. "Monitor stage is 20 feet, so that'll be below monitor stage. For the Russian River at Guerneville, the forecast is for it to reach near 31.9 feet, almost 32 feet, which is right borderline on flood stage."
James White, meteorologist with the National Weather Service’s Eureka office said rain isn’t the only concern.
"Our biggest concern with this system is it actually has very strong winds, along the coast, we're expecting winds gusting 60 to 70 miles per hour or maybe even higher in localized areas," White said. "And even in the valleys that are usually protected like Ukiah, we'd expect gusts of 50 to 60 miles per hour."