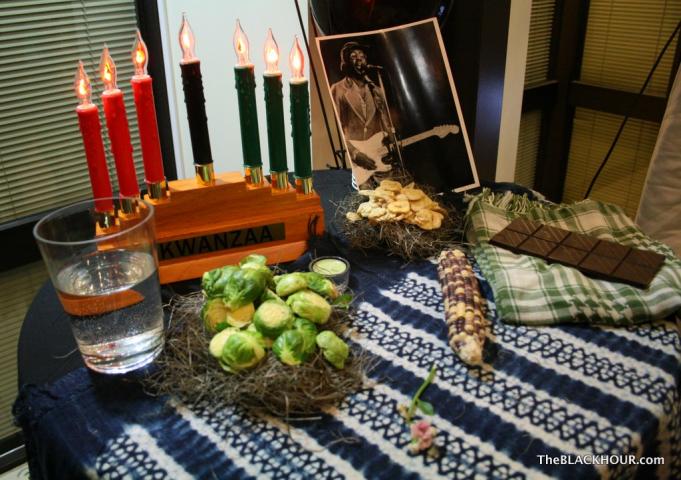 photo credit: Courtesy of Reginald James/flickr
Christmas is over, Hanukkah is passed, but the candles of Kwanzaa still burn.
Derived from the Swahili word for “first” - Kwanzaa is celebrated widely, from Canada to the Caribbean. A decade ago polling showed that 4% of Americans planned to celebrate the week-long holiday - while 3% planned for Hanukkah.
N’gamè Gray is founder of Sonoma County’s NuBridges Youth Collaborative and organizer of this year’s public Kwanzaa celebration in Santa Rosa. She said the holiday is often misunderstood.
"I think a lot of the misconception with Kwanzaa is it's a religious holiday or a holiday to take place in lieu of like Christmas," Gray said. "Well, actually there's a lot of families that celebrate both."
Conceived in 1966 by activist Maulanga Karenga, the holiday is a celebration for those of African descent across the Americas, Gray said.
"Kwanzaa for a lot of African Americans, and the diaspora really, is a week that we can celebrate our culture and who we are," Gray said. "We use this time to celebrate our elders and our ancestors, and we also utilize this time to educate our own families."
Each day celebrates a different principle starting December 26th and ending January 1st ,Gray explained.
"The first day is Umoja, which means unity," Gray said. "Kujichagulia is the second day of self-determination, and Ujima is collective work and responsibility. Ujamaa, which is cooperative economics, Nia, which is purpose. And the day after is Kuumba, which is creativity. And the last day, which is Sunday, the 1st of January, it will be faith."
Gray said Imani, faith, in Kwanzaa differs from the traditional understanding.
"When we say faith, it's not to one specific religion or belief," Gray said. "It's to celebrate all the faiths that are practiced."
This year will be Gray’s third public Kwanzaa celebration in Sonoma County.
"I started Kwanzaa through NuBridges in 2019," Gray said. "NuBridges was formed in 2018, and my experience with Kwanzaa out here, I've always gone to either Marin City or in the East Bay to celebrate Kwanzaa. It wasn't really celebrated too often out here, not as far as programs go, and that's why I started it because it was really important for us to have a place here where we could celebrate who we are without having to go out of town."
Celebration is not the only goal.
"Most importantly, to me, it educates people, whoever you may be, to why we celebrate the holiday," Gray said.
Gray said as for what’s in store for this year’s local celebration...
"We're going to open up with a movie called The Black Candle, the Kwanzaa movie, and then we're gonna go into more cultural aspect of libations and giving honor to our elders and our ancestors," Gray said. "This year we're having African name changing ceremonies for both an infant and a middle-aged person."
"Then we have youth participating in some of the program. We have Kwanzaa arts and crafts for the folks, and then we're going to end with what's called Karamu dinner, which typically is practiced on the last night."
The 3rd Annual NuBridges Kwanzaa celebration runs on Kuumba, the day of creativity. December 31st, from noon to 5 PM at the Arlene Francis Center in Santa Rosa.