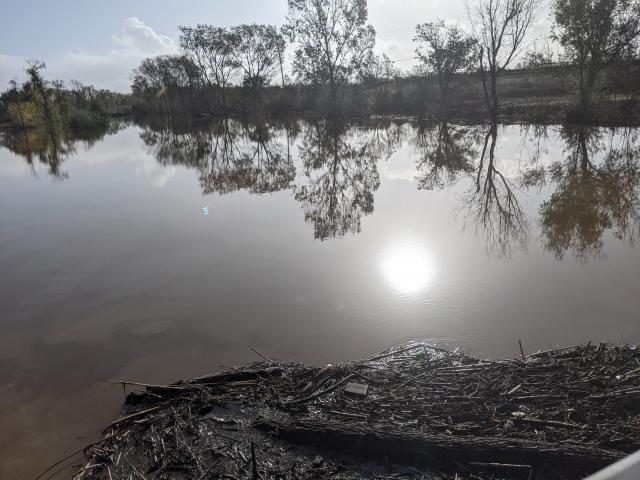 Runoff nearly fills a Rohnert Park flood control channel in this 2021 file photo
photo credit: Marc Albert/KRCB
Today's light rain is expected to intensify Friday night, raising the chance of flooding and possibly mud slides. Local officials say their readying for the challenge, while forecasters say more storms next week could pressure those preparations.
With just more than six inches of rain possible through Saturday in one of the wettest parts of the county, Cazadero... and at least an inch in the driest spots, public works crews were busy clearing culverts and storm drains before the system makes landfall.
Johannes Hoevertsz is director of Sonoma County Public Infrastructure. He said he anticipates flooding in the usual spots, but isn't expecting any cataclysm.
"Our traditional low spots, for example Green Valley Road, Stony Point Road, Wohler Road, we are not concerned about any major things happening."
However, officials are monitoring the burn scar left by the Glass Fire, which could spawn slides. There are also concerns of flooding in the Russian River basin. County officials will begin distributing sandbags at firehouses in Guerneville and Monte Rio Friday morning at 9.
Cindy Palmer, a National Weather Service meteorologist, said recent rains have largely saturated soils, meaning there will be more runoff--that could create real dangers for those driving between late Friday night daybreak Saturday.
"Given how much rain we've had with the last storm following Christmas and now we're continuing to have light to moderate rain today and again tomorrow, we will see rapid rises along area streams, creeks and rivers, if you were driving at night, you will not be able to see the rising water most likely."
She said the Laguna de Santa Rosa is expected to flood Stony Point Road at some point.
Though major flooding along the Russian River isn't expected, some is possible, she says.
"We do expect it to go above action stage at Guerneville, and there is the potential that it could, depending on how much rainfall we get, it's not an outside probability that it actually could go above flood."
Hoevertsz ased the public to report downed trees, limbs and powerlines to the agency, formerly called the Transportation and Public Works.
After this storm, the chance of flooding will remain. Following a break new year's day, Palmer says,
"We are looking at another storm moving into the area during the day on Monday and we're looking at another significant storm for January 4th and 5th, there definitely the risk for more flooding as we go through the first week of the year."
That system could drop up to another half foot of rain on the region.