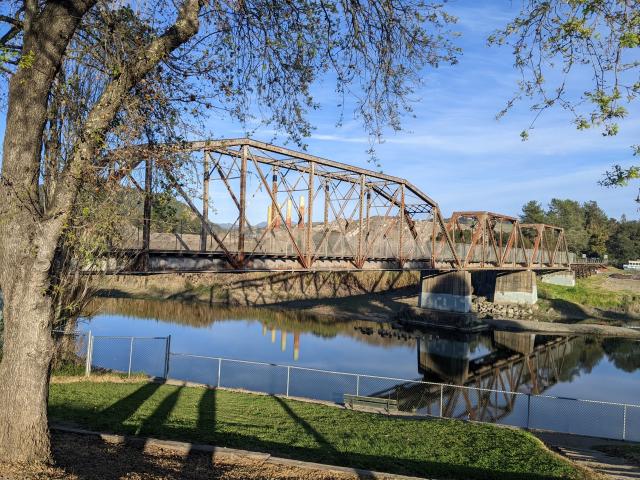 The Russian River at Healdsburg
photo credit: Marc Albert/KRCB
Environmentalists and Sonoma County recently settled a legal case over water, wells and their interplay with the Russian River. The deal will bring more regulations and higher costs...while also safeguarding local rivers and reducing the chance of wells running dry.
Sean Bothwell is executive director of California Coastkeeper Alliance, which filed the suit. He said the issues locally demand immediate attention.
"We don't have time to wait for SGMA's timeline before we start managing our groundwater sustainably. Salmon, other aquatic life, public trust resources, are being harmed now and it needs to be addressed now."
SGMA is California's seminal Sustainable Groundwater Management Act. The state's new groundwater rules, signed into law by former governor Jerry Brown, don't fully take effect until 2034.
Coastkeeper accused the county of approving hundreds of wells without proper analysis. Water pumped from underground aquifers is generally replenished by a river or stream if one's nearby. That depletes the river.
The legal settlement requires the county to develop a new well ordinance taking that into account. Bothwell said he's pleased with the deal even if there's little set in stone.
"We never thought that a judge was going to dictate exactly what the county's ordinance has to look like. The fact that the county saw that they needed to do this and ordered staff to go back and do it appropriately, and really have an expert panel look at it, at this point it's the best we can ask for."
The settlement prevents the group from re-opening its suit, but Coastkeeper's involvement is far from over.
"We are certainly going to keep watchdogging the ordinance as it gets developed, we have technical experts on standby to help us--if we feel like the county was just dotting their i's and crossing their t's and this was really just a formality, we can challenge that in court. Right now, where we're at, we're happy with the outcome of the settlement for the most part, it was what we were looking for from a judge---to give the county direction to go do this ordinance and address the connection between surface and groundwater," Bothwell said.
He said he's confident officials, environmentalists and agricultural groups will find a compromise suitable to all.
"Everyone will have the confidence to know that there will be enough water in the river for fish, everyone with surface water rights will be able to get their allocation appropriately, and people, when they dig a well, will know that they won't run dry."
While the settlement doesn't create legal precedent, Bothwell says Coastkeeper and other groups might bring similar actions in other parts of California with vanishing surface water.