A victory for salmon as superfluous dam comes down 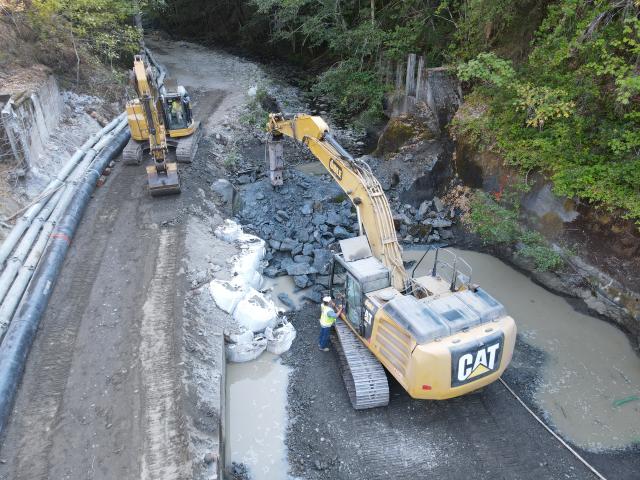 photo credit: Courtesy of Cal Trout
From the Elwha River in Washington to the Klamath in California dams are coming down and fish are moving back up the freed waterways. Not all dam removals are large scale though.
Just south of the little hamlet of Leggett where Highway’s 1 and 101 meet in Mendocino County sits Cedar Creek.
A tributary of the South Fork of the Eel River, Cedar Creek had been mostly cut off to spawning salmon for over 60 years thanks to a small decommissioned dam from an abandoned hatchery.
Now the eight foot tall dam is gone and Peter Tira with the California Department of Fish and Wildlife said its a huge win for Cedar Creek.
"It’s used by four different anadromous fish species, right," Tira said. "We've got the Coho salmon, we have the Chinook salmon, we've got Steelhead, we've got Pacific lamprey. So we open up miles of additional spawning and rearing habitat for all those species by removing one seemingly innocuous dam."
Cal Trout’s Matt Metheny said the project was simple but not straightforward.
"To preserve water quality in Cedar Creek, in the South Fork Eel, we needed to do the demolition in a de-watered creek bed, so we got up above the dam, diverted the whole creek through a bunch of pipes," Metheny said. "If we had had just that concrete sitting there with no water, it could've come out many years ago cause the demolition only took like a week or so."
One reason for success, Metheny noted, is thanks to the property owners.
"We had a really cooperative landowner and that was a key piece of it" Metheny said. "There is a Buddhist meditation retreat center there, and these were the, the people who worked with us and allowed us on their land."
Tira said access to private property is a major obstacle to removing similar dams and blockages.
"They exist on many, many rivers and tributaries throughout Northern California," Tira said. "Maybe we don't have access or maybe a landowner's not necessarily interested in, in making changes. You know, it's really important to get fish above these dams. Usually it gives them access to spawning habitat and cooler water and the upper reaches of creeks in California. And sometimes it's natural, sometimes just over time, rocks naturally kind of dam up."
Following the dam’s removal, which was completed in September, Chinook salmon have already been observed spawning above the dam earlier this month.