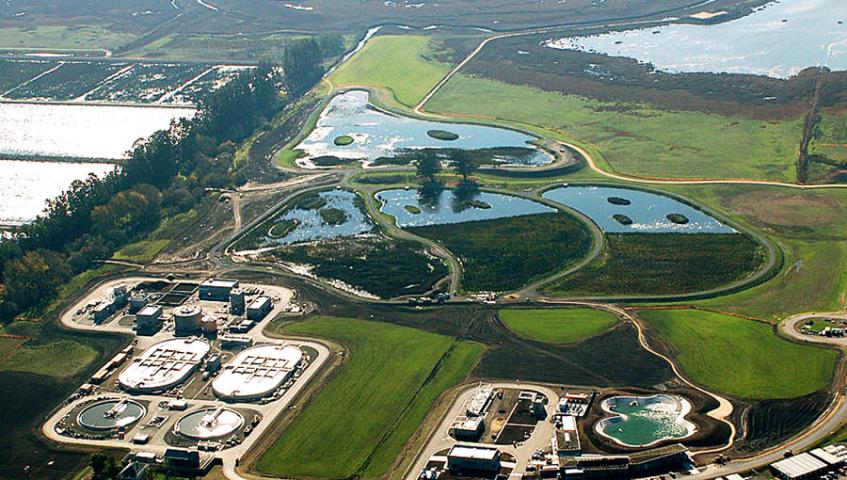 photo credit: Courtesy the City of Petaluma
Petaluma continues to move its infrastructure away from fossil fuels.
Like Healdsburg, Petaluma is putting a floating solar array at the city’s water treatment plant - called the Ellis Creek Water Recycling facility. The solar array will be operated by the same company behind Healdsburg’s - White Pine Renewables.
At the final meeting with the current iteration of the city council, a unanimous vote approved the project. It will provide 98 percent of the treatment plant’s power needs according to the city's Patrick Carter.
"The panels are on pond three," Carter said. Pond three is about 17 acres, and the panels would cover about 68% of that pond's surface. And with that, we'd get 5.8 megawatts of direct current power, providing...approximately 98% of both the meters that are covered."
Carter detailed the project financials.
"Our baseline costs are about 1.9 million dollars of electricity costs at Ellis Creek on an annual basis," Carter said. "This project would represent about $508,000 of savings in the first year alone. It's staff time that's required to make this project happen. White Pine builds the solar relay and maintains and operates it over a 20 year contract, which would result in about 13.1 million of estimated savings."
One byproduct of the project’s impact is the potential for creating mosquito larvae habitat. A mosquito mitigation plan is included in the project, but as commenter Susan Kirks noted, the project touches on interconnected environmental concerns.
"I'm guessing there's an understanding that there cannot be any construction activity from February 15th to August 31st, the migratory bird nesting season," Kirks said. "And so even though mosquitoes are considered pests, mosquitoes are an incredible nutrition source and needed by many of our avian species who are in the Ellis Creek Ponds area."
The solar array will cover just one of the water treatment facility’s 11 ponds and is expected to be completed by the end of 2024 - with the potential for more arrays on the facility's other ponds in the future.