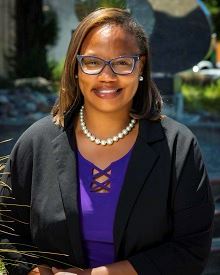 photo credit: Courtesy the City of Santa Rosa
Any celebratory breaks have been short-lived for Natalie Rogers. Selected by a 4-3 vote within the city council, Rogers, who also works in mental healthcare at Kaiser in Santa Rosa, was right back to work on the overnight shift the day after her ascension to the mayoralty earlier this week.
She said she doesn’t take the position lightly.
"It was a bit of a surprise to see the outcome," Rogers said. "I'm honored that it turned out the way that it did. Very excited to be the mayor of Santa Rosa and to continue to see our council work together to keep pushing Santa Rosa forward to be a great destination city."
Rogers is the city’s first black woman to serve as mayor and noted the progress on diversity.
"All of our departments have been working on increasing our diversity," Rogers said. "It's just an honor to be a part of that."
Rogers said a holistic approach to the city's issues is a focus for her and the council.
"The new community center and the new fire station that we are looking at, the Hearn over-crossing; so there is a lot that we are putting into Roseland to try to make Roseland whole," Rogers said. "But with that being said, we have a whole city to run."
She said she’s excited for what’s to come.
"We each have a level of expertise in different areas, and when you bring that all to the council, I believe we can do wonderful things," Rogers said. "We have two new members gonna be a curve right now because there are a lot of changes, including me becoming mayor; but I think that we will get through the changes."