Advocates ratchet up efforts to boot cattle from Point Reyes 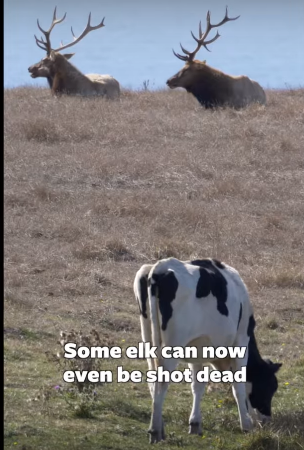 A screenshot from a provocative video demanding an end to ranching at Pt. Reyes Nat'l Seashore
photo credit: credit In Defense of Animals
Environmental and animal rights group, In Defense of Animals, has enlisted actor and narrator Peter Coyote in a campaign opposing cattle ranching at Point Reyes National Seashore.
The on-going struggle pits the natural local fauna---free running Tule Elk, against longstanding ranching operations.
"Hundreds of these magnificent animals have died slow, withering deaths from starvation and thirst. An eight foot tall, three-mile-long fence prevents elk from reaching more food and water. It was built for cattle ranchers, leasing land in the park. Ranchers were paid millions of dollars to leave decades ago, but they lobby politicians to stay," Coyote said in the video.
Though once native, Tule Elk were re-introduced in 1978 when ten animals were released on the former Pierce Point Ranch at the park's north end. The population numbered around 220 last year, according to an official count.
The fences are meant to protect cattle from diseases that may impact the elk. Since its establishment at a national seashore sixty years ago, ranching activities have continued.
The spot, with Coyote's narration, paints a depressing picture.
"Some elk can now even be shot dead to reduce their numbers. Meanwhile, five thousand cows pollute park soil, streams and the atmosphere. It's time Point Reyes became the wild place its founders intended. Tule Elk, like all wild animals in national parks should be set free."
Friction between wildlife and ranching at the park are nothing new, but recent and repeated drought is shifting the playing field. Park service officials have been trucking water in for the elk.
The park service is now revising its management plan for the area, and collaborating with the Federated Indians of Graton Rancheria. The National Park Service is expected to begin an environmental review in the spring and complete environmental review by the end of 2024.
The full video can be viewed here