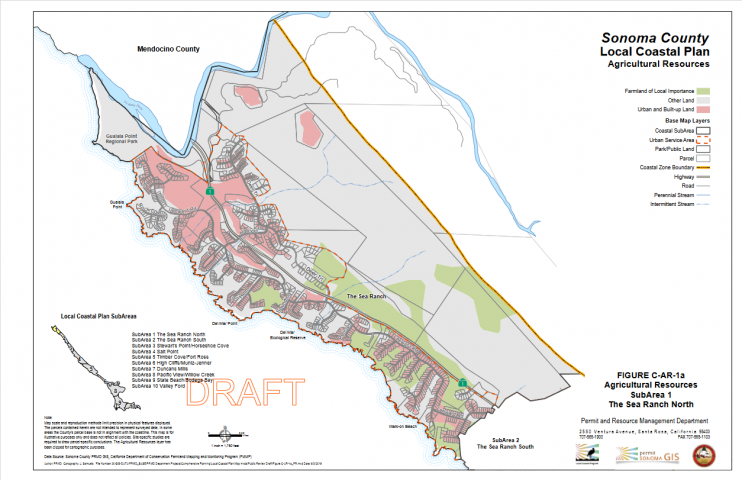 photo credit: Courtesy of Permit Sonoma
An updated version of Sonoma County’s Local Coastal Plan is on the horizon. Some in the farming community concerned over what it might mean for agriculture along the Sonoma Coast.
One major priority of the California Coastal Act is the protection of productive agricultural lands within the “coastal zone”. Wendy Krupnick, president of the Sonoma County chapter of the California Alliance with Family Farmers says it is more important than ever.
"There's a real need for increasing local food security everywhere, but especially in more remote regions like the coast, which is so prone to being cut off from supply chains increasingly so with climate change," Krupnick said.
Permit Sonoma’s Gary Helfrich is the planner behind the draft update of Sonoma County’s Local Coastal Plan.
"There are of course natural barriers, which is lack of water, poor soils, climate that isn't really that good for a lot of crops," Helfrich said. "Effects of sea level rise. Wells are progressively becoming saltier."
Despite the lack of suitable land as noted by Helfrich, over 2,000 coastal acres make the cut as “farmland of local importance.”
Permit Sonoma’s Bradley Dunn said the updated plan continues to protect against encroaching development.
"So the minimum parcel size is associated with subdivisions, not necessarily farming, and we are really trying to set it at a level that preserves farmlands and prevents subdivisions and conversions to non agricultural uses," Dunn said.
Helfrich said there are still a number of suitable agricultural properties.
"All this is, is a restriction on subdivision," Helfrich said. "It doesn't restrict your activity on the property. You can have a farm on, on any agriculturally zoned parcel. For reference, there are 304 agriculturally zoned parcels that are not owned by a public agency."
Helfrich said they are of many sizes too.
"136 of them are under 20 acres, so any one of those could be bought and turned into a small farm," Helfrich said. "And in fact, there's over a hundred of them that are under 10 acres. So there's lots of small parcels that already have agricultural zoning in the coast."
While there are limited but viable options for farming within the coastal zone, minimum parcel sizes do restrict the ability of landowners to breakup and sell arable farmland as small farming plots. That's something Helfrich said helps maintain viable farmland, but Krupnick said may put land far beyond the financial reach of would be small farmers.