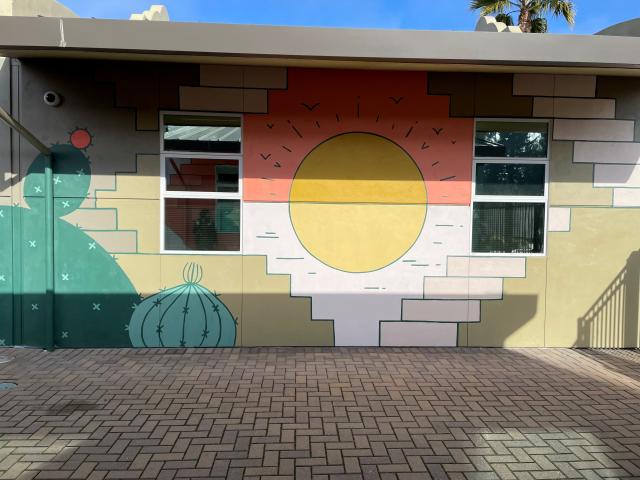 photo credit: Courtesy of KRCB/Noah Abrams
Art transforms the world around us - just as it does the artist in action. One mural has helped the transformation of people and place in Santa Rosa.
Amarosa Academy is hidden in plain sight among industrial spaces in Southwest Santa Rosa.
Georgia Ioakimedes is the school’s administrator.
"So our program exists primarily to serve students who have been expelled from their school districts," Ioakimedes said. "So we're talking typically about marginalized students, students who have not had a good experience with the school system. In addition to expelled students, we provide students to pregnant and parenting teens."
Ioakimedes said the student body is small, around 25 students on any given day.
"We have a focus on restorative education and believe that every student has the right to an education in a safe, supportive place," Ioakimedes said. "So we try to provide that place where they can come and learn and grow and move forward."
But all the students had their hand in transforming the school’s walls into the expansive mural: See You on the Other Side - led by artist Erika Lutz.
"I felt just immediately like this is a space that I need to be in, that I feel connected to, and I just see so much opportunity," Lutz said. "And Georgia came to me and she had said that we need to use these walls to help tell the story of the voices of these students."
For Lutz, the project was always about more than just art.
"What I saw immediately were everyone's eyes," Lutz said. "We were all behind masks, and their eyes were just asking to be seen and to be heard. It's not just about a mural. We would figure out how we're gonna paint a mural, but this was really about a healing experience for this body of people, the students, the staff, everyone who inhabits the space."
The finished project draws inspiration from the works of MC Escher and the landscape of Monument Valley, but Lutz said with plenty of the students’ vision.
"For example, there were a lot of scenes with water when we asked them to imagine where they could see themselves and they felt safe and at home and they belonged," Lutz said. "There were so much water and nature and they were there with other people that they cared about."
Images, information, and a short documentary on the mural See You on the Other Side as Amarosa Academy in Santa Rosa can be found online at Seeyouontheotherside.us.
The mural is one of the latest art projects from local non-profit ArtStart.