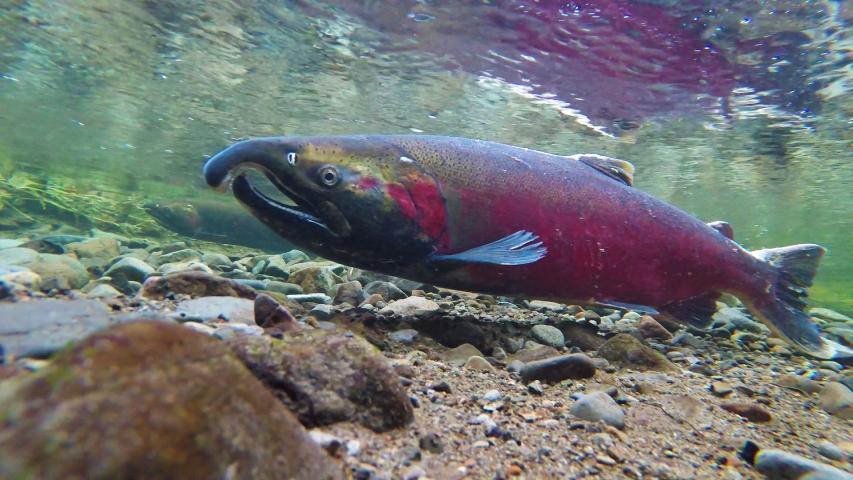 photo credit: Courtesy of BLM/flickr
With the recent rains, KRCB’s checked in with local fisheries experts Eric Ettlinger and Josh Fuller. Here’s more from the conversation with Ettlinger, Marin Water’s Aquatic Ecologist.
Last winter residents around the North Bay were wowed by video of salmon swimming through neighborhood creeks and small tributaries in Marin County on their way to spawn. Eric Ettlinger, a fisheries expert with Marin Water, said the previous spawning season was hugely successful for Marin’s salmon.
"In this summer, we had a record breaking number of juvenile salmon," Ettlinger said. "In fact, it was along the lines of three times the previous record of fish. So there were just juvenile salmon everywhere we looked."
That’s despite the massive barriers Ettlinger said face those fish.
"So the fish in this area have lost about 50% of their habitat because they can't get past the dams that we have here," Ettlinger said. "And the 50% of the habitat that they have left has been degraded by past logging and housing development."
He said Marin Water has a strong focus on restoration and protection efforts for the salmon.
"There's been a lot of work to address migration barriers, things like culverts," Ettlinger said. "The water district is going to be embarking on a huge project to deliver spawning gravel into Lagunitas Creek, which has been cut off by the dams, and also to install hundreds of logs; again, to provide kind of the shelter from predators and high flows that the juvenile fish need."
Ettlinger explained the relationship between winter rains and salmon runs...
"It doesn't create more fish," Ettlinger said. "The fish that are; we're going to get this year are probably in the lower creek or in Tomales Bay, waiting to migrate upstream. But when we have more rain, they tend to go higher up in the watershed and the public gets to see them. So the public tends to have this perception that, you know, more rain means more fish, but it is beneficial for the fish when we have a wet winter that they can spread out and spawn in lots of the smaller streams and throughout the watershed. So I am hoping for a wet year."
Ettlinger said predators are always a threat too.
"Generally the fish prefer clear water, but when they're migrating, they like it to be a little bit more opaque because they need to avoid predators along the way," Ettlinger said. "The big predator that they have when they're migrating are river otters. So they will generally not move until they have a little bit of protection from that opaque water."
But a limited one at that.
"We don't have very many river otters, so, you know, they can't catch a lot of salmon, but, the salmon don't want to take that risk," Ettlinger said.
Ettlinger described what those lucky enough to glimpse the journey of Marin’s salmon can get to see.
"When the creek has had some time to clear up, the fish will be busy digging their nests and laying their eggs, and it's a really exciting thing to come and see," Ettlinger said.
For those hoping to see salmon in Lagunitas Creek, Ettlinger said a designated fish viewing area on Sir Francis Drake Boulevard is a great spot to see spawning runs.
In Sonoma County, NOAA Fisheries expert Josh Fuller said salmon can be found all the way up Sonoma Creek into the headwaters in Sugarloaf State Park - with the best viewing along Adobe Canyon Road in Kenwood.