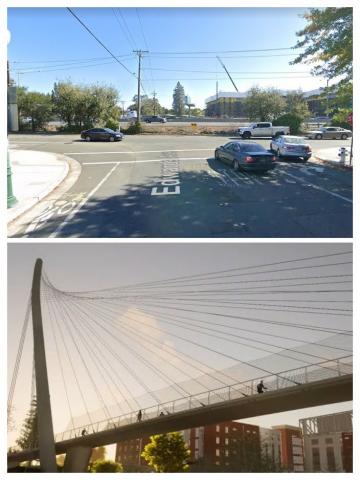 Current conditions and a rendering of a future bridge connecting Elliot and Edwards Avenues
photo credit: GoogleMaps/City of Santa Rosa
Though millions set aside for it will now be spent elsewhere, Santa Rosa officials finalizing designs for a bike and pedestrian bridge over 101 say it will still open in 2026.
The meeting Thursday mainly focused on accoutrements---lighting, fencing, paint colors and artwork rather than the core design, which has largely been settled.
Officially an 'offset, single-pylon cable-stayed design,' the proposed Elliot to Edwards avenue overpass bears resemblance to the new, eastern half of the Bay Bridge.
People attending a recent Design Review Board meeting, including Eris Weaver with the Sonoma County Bike Coalition, say they're wowed.
"I cannot wait to ride across this bridge, it's beautiful."
There were a few nagging questions. Some members of the public say, at fourteen and a half feet wide, the bridge would be too narrow, creating conflicts.
Steven Grover, the project's lead architect...said options were limited.
"The width is very constrained. We jumped through a lot of contortions to eke out the width that we are providing in the design. We really can't squeeze any more."
Planned since 2007, some also questioned how further delays aren't inevitable after the city shifted money away from the project.
Santa Rosa Transportation Planner Nancy Adams said the city remains committed to completing both in 2026.
"We have these two major investments that have been on the books for many years and it's been a struggle to get the Hearn Avenue interchange to the finish line. It's a very complicated process but the goal of the city is to get both of them funded, the strategy is to deliver the Hearn project and to follow up delivering very shortly after, the bike/ped overcrossing."
Others question the cost. The Hearn Avenue project---with four lanes for motor vehicles...is expected to cost just two million more than Elliot/Edwards bridge.
Grover, the architect, said the former's pre-cast concrete design uses cheaper methods and materials, which aren't possible at Elliot/Edwards.
"The site constraints... are such that a conventional concrete structure is just not feasible. A very thin deck, long-span structure is required here and that costs significantly more."