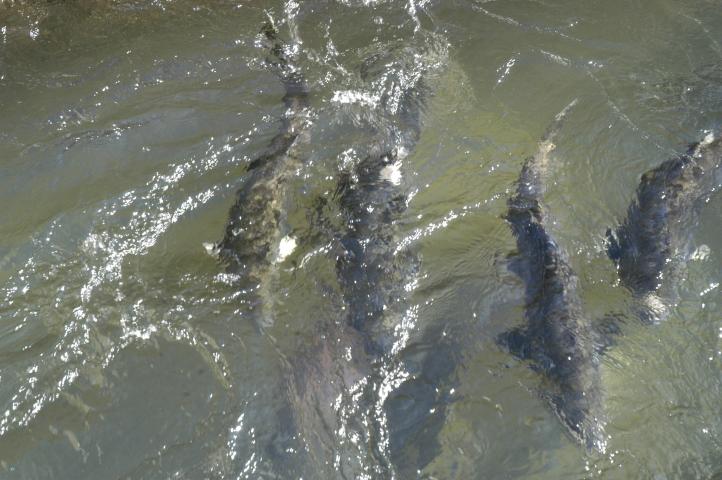 photo credit: Courtesy of CDFW/Flickr
Winter rains signal salmon runs. We may not have gotten a lot of it so far, but fisheries experts weighed in about what the rain does mean for local salmon populations. Including Eric Ettlinger.
"We've been anxiously awaiting this rain because it's been a pretty dry November and we've seen very few Coho salmon so far," Ettlinger said. "The salmon we have seen are Chinook salmon. They're otherwise called king salmon. They often come up even before the rain starts, so we've seen a lot of them so far. It's been a really good year."
Ettlinger is an aquatic ecologist for Marin Water. His work focuses on salmon in Lagunitas and San Geronimo creeks.
Josh Fuller is with the National Oceanic and Atmospheric Administration fisheries office in Santa Rosa. He said the shot of rain is much needed for salmon hoping to move into the Russian River mouth.
"Obviously Chinook and salmon cannot get in the system when the mouth is closed, but there was frequencies of it being open and some fish were moving up the system, but not great numbers," Fuller said. "And then once we had that rain in early November, we saw a good spike of Chinook coming up the Russian River, I think we're about a thousand or so fish counted at Wohler Dam."
Ettlinger said fish are on the move all over the Bay Area.
"We've been hearing about salmon swimming into Lake Merritt in Oakland and into some of the watersheds south of San Francisco," Ettlinger said.
Fuller stressed that it’s still early in the season for salmon runs.
"It's hard to say what the counts ultimately are going to be," Fuller said. "Projections were for a better Chinook return year this year. Are we seeing that yet? Hard to say."
Ettlinger has advice for actually seeing fish swim upstream.
"The best time for people to come out and see spawning fish is usually about two days after a good rain," Ettlinger said.