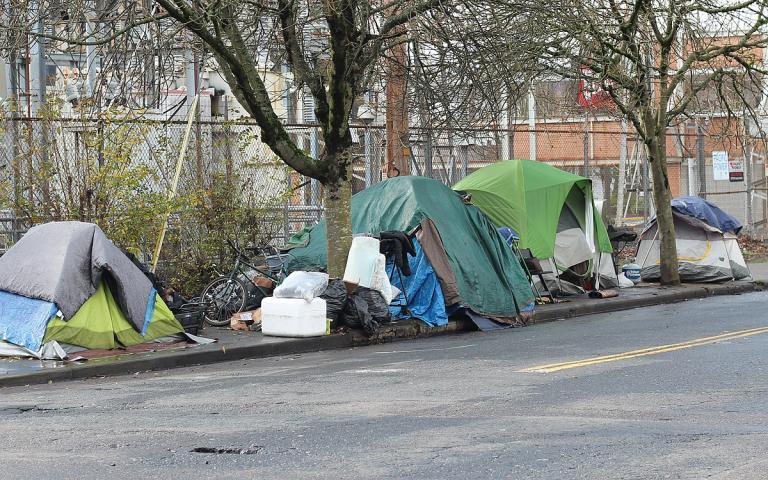 photo credit: Courtesy of Graywalls/Wikimedia
Sonoma County’s most recent point in time homeless count showed an increase in the number of unhoused individuals in Healdsburg and North County. Healdsburg continues to make moves to address the issue.
Healdsburg Housing Director Stephen Sotomayor said the city has completed a major objective towards trying to end homelessness.
"A council goal from a while back was to collaborate with the county regional homelessness plan that provides for, among other things a shelter and a navigation center in the North County," Sotomayor said. "And I'm proud to say that we're here."
That new homeless center for North County: the L&M Motel in Healdsburg, converted via Project Homekey.
Now called the L&M Village, the services center is operated in partnership with local nonprofit Reach for Home. It was slated to open in August, but funding delays have held up the site. Sotomayor said there's a need for $80,000 of the Homekey grant earmarked for operations of the Village to be spent on infrastructure.
"The L&M is an old hotel that's been built incrementally over time," Sotomayor said. "You open up walls and you find surprises. And during the course of construction, we found several of these and several requirements that we put in, including adding infrastructure such as sidewalks and replacing sewer lines, which is just being a good neighbor to the neighborhood and ensuring that the project will fit in."
Healdsburg Mayor Osvaldo Jimenez said the opening of L&M Village is a pivotal moment.
"Housing our unsheltered folks in our community is a complex issue," Jimenez said. "It is something that it doesn't have a fine line that you could just point A to B. There's success, right? I've lived in North County a long time and I have not seen North County pick up the torch to be able to provide supportive services for unsheltered folks. So this is a really poignant moment."
An opening ceremony is scheduled for January 12th.