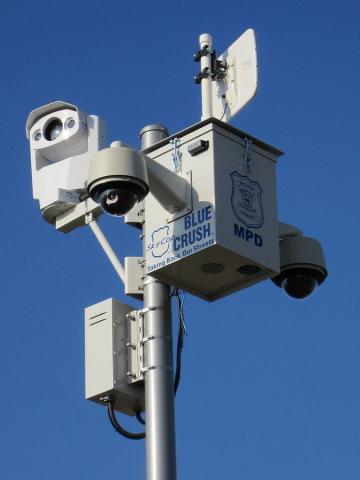 photo credit: Courtesy of Thomas R Machnitzki/Wikimedia
Police surveillance tech has been met with push back around the Bay Area - this week Sebastopol added itself to the list of cities putting greater scrutiny on the controversial technology.
A 2020 audit of Sebastopol’s police department raised the question of whether the city’s values were reflected in its policing policies. Two years on the city has moved to insure greater transparency and public oversight of any potential use of surveillance technology.
Sebastopol’s new police chief Ron Nelson addressed the aim of the new city policy.
"It's to essentially prevent and protect our citizens from government intrusion and government overreach," Nelson said.
California currently bans biometric - a.k.a. facial recognition - surveillance by police departments, but that law will expire starting next year.
Nelson detailed what tech Sebastopol’s new ordinance covers.
"Surveillance that government entities use, including biometric surveillance, facial recognition technology, and predictive policing, as well as others, seemingly innocuous as license plate readers or video surveillance cameras that are mounted," Nelson said.
He noted what oversight the ordinance enacts.
"Various reporting requirements," Nelson said. "It would require the city department, which primarily would be the police to author an annual report for each type of technology we're utilizing. It would require council prior to authorizing any use of expenditures or use of technologies to weigh the cost versus the benefit, and also what the public impacts are."
Local lawyer Omar Figueroa noted the precedence.
"Ordinances of this type have already passed in cities as different as Palo Alto, San Francisco, Oakland, Berkeley, Davis, and even a whole county, Santa Clara County," Figueroa said. "So this would be a first for Sonoma County, but not a first for California."
While the new restrictions do require increased reporting and public input, the ordinance does allow for emergency use of surveillance technology during “exigent circumstances." That's defined as presenting an immediate threat to life and safety.