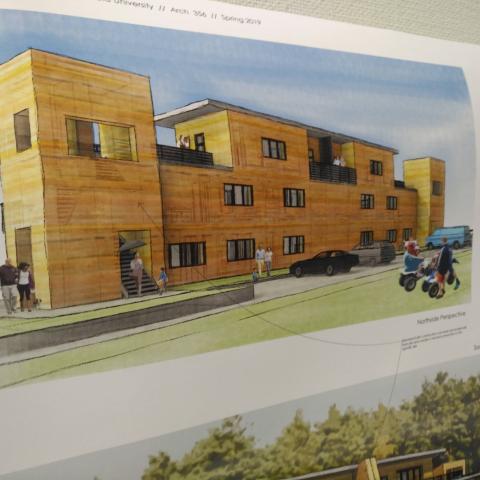 photo credit: Marc Albert/KRCB
Hoping to speed construction of more affordable housing, Petaluma officials this evening will consider waiving a host of development fees usually tacked on to new construction.
The proposal would waive impact fees for traffic, open space and park acquisition, park development and city facilities development for affordable housing projects.
Only developments owned and operated by nonprofits that are also deed restricted as affordable for at least 55 years after opening ... or that offer supportive services would qualify.
Aly Gaylord is director of housing development at MidPen Housing, an affordable housing developer which supports the move. She said fees can make or break a project.
"The impacts are huge. When you are looking for a million dollars or more, depending on the size of the project, that is a real feasibility issue to getting affordable housing developed."
Gaylord says developers typically turn to cities, counties, other agencies or even state and federal grant programs for subsidies---a process that can cause considerable delay.
According to a city analysis, without changes, a $13.5 million renewal of a rundown 60-unit motel---part of the state's Project Homekey---would be assessed $1.5 million in impact fees.
Gaylord said a 44-unit affordable project Midpen is building in Petaluma has been assessed $1 million worth of fees. That works out to nearly 23,000 dollars per apartment.
"Development impact fees are really, really constraining to affordable housing development. As we are keeping our rents low and the housing is deed restricted for 55 years, we don't have that kind of extra cash."
Developments that include both affordable and market rate housing on a single site, would not qualify.
The city did not forecast how much money it would forego should the proposal be approved, or how it would be replaced.
The meeting is scheduled to get underway at 6 p.m.