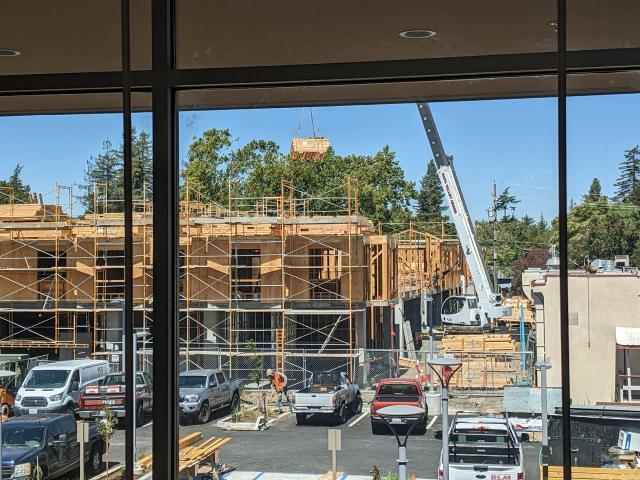 August file photo of construction underway at the Caritas Center in Santa Rosa
photo credit:
Vowing to make homelessness rare, brief and non-reoccurring, Santa Rosa elected leaders this week unanimously approved a strategy to functionally end homelessness in the county seat by 2027.
More a framework than a step-by-step roadmap, the 'strategic plan' commits the city and nonprofit agencies it contracts with to ramp up services on a number of fronts, such as producing more housing and sewing up holes in the safety net contributing to homelessness in the first place.
A detailed action plan will follow.
Santa Rosa has already implemented a number of changes ahead of the new initiative, including launching InResponse---mobile mental health counselors, the approval of state Homekey conversions of run-down motels and new shelter capacity through Catholic Charities "Caritas Center." But Kelli Kuykendall, Santa Rosa's Homeless Services Manager, says much more housing is needed, along with getting direct aid to those unable to make their rent, and at risk of winding up on the street.
"We need interim housing that supports rapid transition to housing, prevention, not just focused on individuals who are homeless at the moment, but preventing those from falling into homelessness. We need sufficient rapid re-housing, permanent supportive housing and affordable housing. We need supportive services focused on housing retention---helping people keep their housing once they exit homelessness."
Despite recent efforts, homelessness has jumped 13 percent in Santa Rosa since 2020, with nearly 1,700 people considered unsheltered.
With such a far-reaching, multipronged effort, City Councilmember Tom Schwedhelm wondered aloud if the framework was too ambitious.
"I also notice that there are over 24 year-one action items. A concern I have, do we have the capacity to take on all 24 of these, or is staff going to recommend to this body, here are the priorities of these 24 year one action items, 'here's the one's we're going to be focusing on,' because I don't think we have the capacity to do them all at the same time."
Officials largely agreed with the assessment. At the same time, city leaders pledged to more closely coordinate with the county, and look to Sacramento for additional funding. Kuykedall says state officials are preparing to release funding to disband encampments and house those living in them.