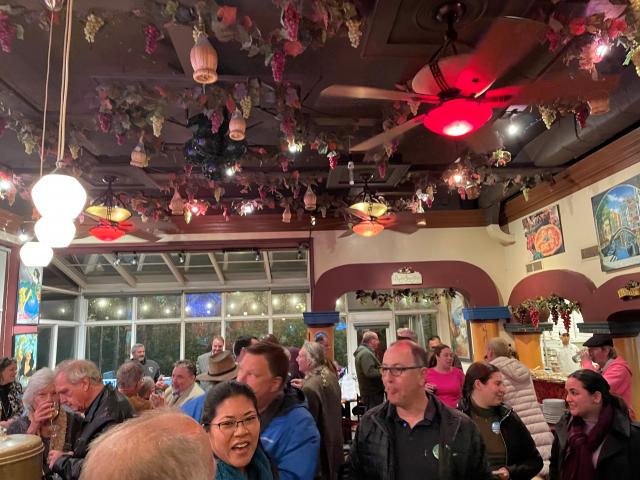 photo credit: Courtesy of KRCB/Noah Abrams
As is customary, local candidates held election night watch parties, KRCB spoke with some on the ballot in Sonoma, and one in Marin County at their gatherings of friends, family, and supporters as results rolled in.
The days of decisive Election Day results may be behind us as the switch to mostly vote-by-mail ballots means results trickle in at a slower pace.
One side effect of the delayed results - lots more smiling faces at election night parties, including Damon Connolly, the Marin County supervisor running for the new 12th State Assembly District, at his watch party last night in San Rafael.
"We really spent a lot of time up in Sonoma County in particular, walked to people's doors, called them, texted them, showed up at events, really came to understand and learn about the issues in Sonoma County," Connolly said. "And of course, I believe I have a strong base in understanding in Marin County. Ultimately, what appealed to voters in this race was the opportunity to send a local voice."
Like Connolly, Kevin McDonnell jumped out to an early lead in his race, going up against fellow term limited council member D’Lynda Fischer in the race for Petaluma mayor.
"Everyone's top issue is climate," McDonnell said. "And I think what Petaluma's got going on is the model for all other areas and people support that. But they also support getting more work done with the homelessness and getting more affordable housing. It's, we really have a housing crisis and people want the city to sort that out."
And despite her early deficit, Fischer remained upbeat and said Petaluma is headed in the right direction.
"The campaign was awesome," Fischer said. "I mean, I learned so much in the last three months. It has been so rewarding, and if you look around, you see my door hangers and we actually hung over 15,000 door hangers on doors in Petaluma and this was a grassroots volunteer effort, and so we had to be out in the streets."