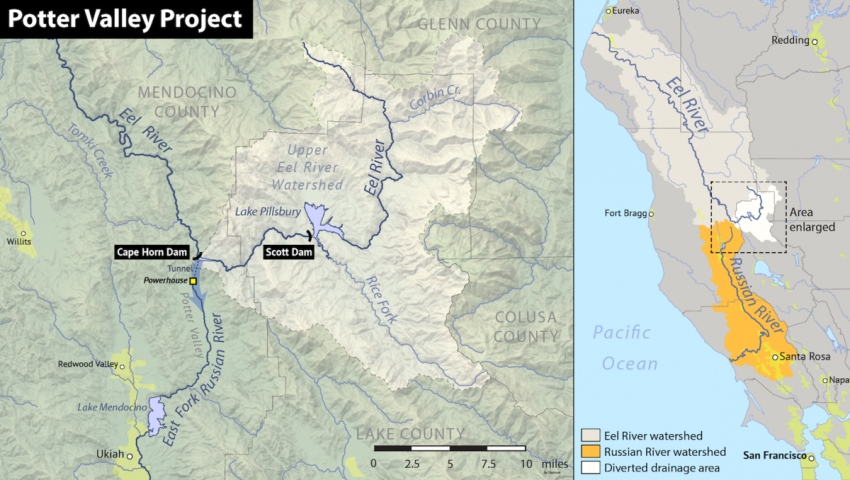 photo credit: Courtesy of shannon1/Wikimedia Commons
PG&E has begun relinquishing its control of the Potter Valley Project. Concerned that this will reduce water supplies, Santa Rosa is exploring options.
Mendocino County's century old Potter Valley Project consists of two Eel River dams, a tunnel diverting some of the Eel into the East Fork of the Russian River, and an inoperable powerhouse in need of expensive repairs.
Outgoing Santa Rosa council member Tom Schwedhelm said one thing is certain.
"This is going be challenging," Schwedhelm said. "It's going to be years ahead of us, but we just need to be supported being on the same team because Santa Rosa, this isn't our main source, but we are some of the big players in this."
Jennifer Burke, Santa Rosa Water's Director, stressed the consequences of ceasing diversions.
"Sonoma Water has done a number of different modeling efforts and determined that in eight out of 10 years, there will not be enough water supply to meet the needs of the upper Russian River communities," Burke said. "And in two of those eight years, in essence, Lake Mendocino is predicted to go dry."
PG&E, which operates the project, abruptly withdrew its re-licensing application three years ago. It's looking to surrender it in 2025. In response to the 2019 notice, Representative Jared Huffman formed an ad-hoc group that spawned the “two basin partnership” - a collection of fisheries advocates, local governments, and tribal authorities seeking to wrestle control of the Potter Valley Project.
Peter Martin, also with Santa Rosa Water, detailed that proposal, termed the “two basin solution”.
"That would include the removal of Scott Dam, which creates Lake Pillsbury and, what they have deemed a run of the river project, that would not rely as heavily on the existing Van Arsdale storage and diversion facilities on the Eel River," Martin said. "This was ultimately identified to cost in the range of a hundred million to four hundred million."
The “two basin partnership” ultimately failed, but their solution remains on the table.
Now, Sonoma Water is launching a new body--the “Russian River Water Forum” in another push to gain control of the project.