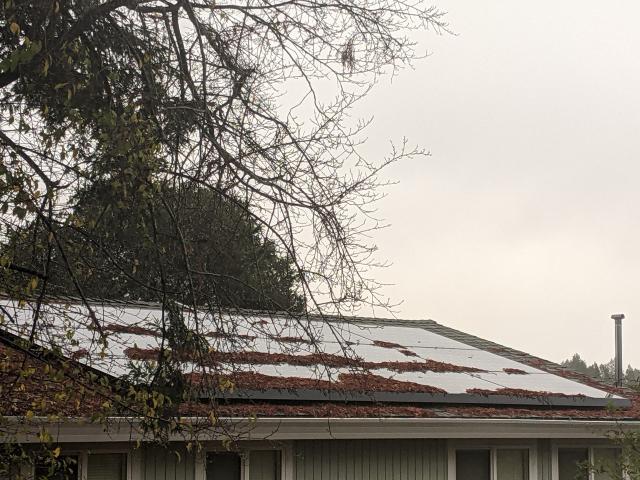 Redwood needles piling up on a rooftop solar system
photo credit: Marc Albert/KRCB
California regulators have postponed a decision yet again on the future cost of rooftop solar systems...while advocates accuse them of undermining solar at the behest of utilities. The decision, which would overhaul incentives and payments for residential solar systems has been postponed until next August at the latest.
The fight is over so-called net-metering. Basically, the rules over who pays what once a solar array is put on a home's roof.
It's a long-running question...whether utilities should be forced to buy solar power from their own customers, and at wholesale or retail rates.
Significant revisions to the way it works now were proposed more than a year ago. Those changes would reduce what solar panel owners receive, turn it Into a credit, and charge them more for maintaining the electrical grid.
David Rosenfeld executive director of solar rights alliance called that a rip-off.
"This is absolutely an orchestrated campaign by PG&E, So-Cal Edison and San Diego Gas and Electric. That is who is behind this whole thing. And, it's obvious why. Rooftop solar is competition for them. They are a monopoly and rooftop solar cuts into their profits."
Rosenfeld said the big utilities are showering decision-makers with money, hoping to influence the California Public Utilities Commission.
"They have been relentlessly lobbying the CPUC, they have been relentlessly lobbying the Governor, the CPUC's proposal for a 'solar tax' and deep cuts to the net metering credit are almost part and parcel what PG&E and the other utilities have been proposing."
Ten thousand megawatts of rooftop solar capacity have been added by more than a million households, providing up to a quarter of midday demand. But, because that extra power vanishes as the sun sets and demand rises, regulators hope to create a system of incentives to encourage those with rooftop panels to add battery storage. This would reduce the need to generate power from dirtier sources during evening peak demand.
There's also a fairness issue.
The state office of Public Advocates says generous incentives early-on charged solar owners too little for maintaining the grid, pushing $3.7 billion in costs onto everyone else's bills, something regulators say will double over the next decade without reform.