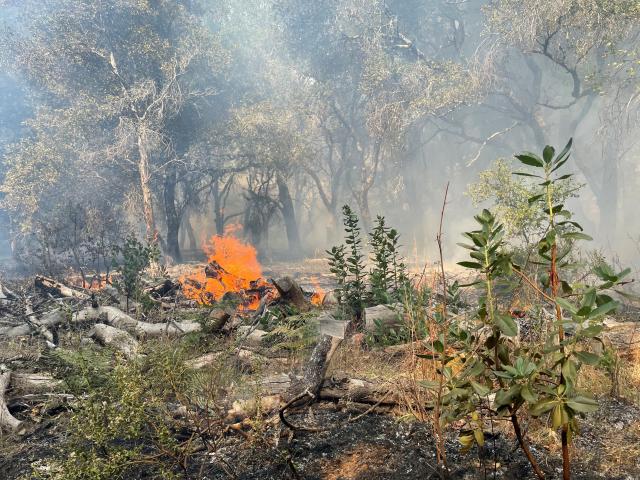 photo credit: Courtesy of KRCB/Noah Abrams
With September’s record heat behind us, and fire risks fading, firefighters and conservation groups are wasting little time, conducting controlled burns ahead of winter. Thursday, October 27th, firefighters intentionally set alight part of Pepperwood Preserve northeast of Santa Rosa---fighting fire, with fire.
Aiming, as the experts say, to 'treat', 105 acres of grassland and oak forest perched high atop the Mark West Springs Area. A dozen engines were among the assets on hand.
The controlled burn serves multiple purposes, according to Devyn Friedfel, Pepperwood’s assistant preserve manager.
"This is really about fuel loading to reduce the fuels of when a wildfire does come, we'll see less severe intensity of the fire," Friedfel said.
This kind of intentional fire or prescribed burn is also critical to prevent oak trees and the habitat they provide, from getting crowded out, Friedfel said.
"Douglas Fir, which without fire suppression, will continue to expand its range and move into the oak woodlands," he noted. "It's just pushed right through the top of it, so it starts to shade out the oaks. Stresses the oak because they start stretching for light instead of kind of getting what we typically see of these nice oaks with these kind of rounded edges and lower hanging branches, reducing the stems per acre of the Douglas fir, so it's actually sucking up less water and nutrients. So you're, you're leaving more nutrients and water and sunlight  for your oak trees. Oak trees are so much more fire resilient as well."
Long before statehood, California's native tribes conducted similar burns. Friedfel said resuming intentional fire is important.
"Douglas Fir are not a bad invasive tree at all," Friedfel said. "They're part of the natural cycle and have their ecological benefits, but without a proper disturbance regime, that balance of oaks and furs gets a little out of whack."
Prescriptive burns will continue over coming days, with officials documenting the impacts at Pepperwood into the future.