Thompson, Brock spar on vision for 4th Congressional District and the nation 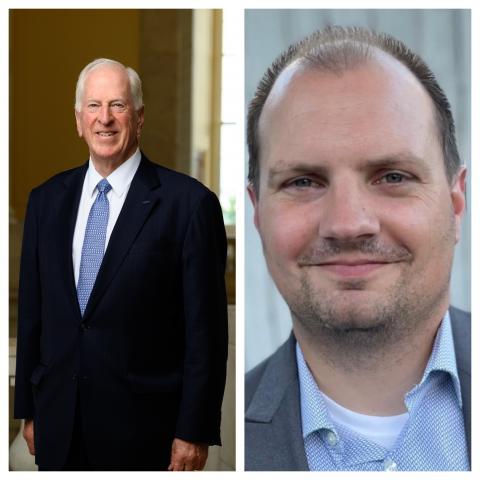 photo credit: Courtesy of Mike Thompson and Matt Brock
Next up in our ongoing election 2022 coverage, the race for the fourth congressional district seat in the US House of Representatives.
Redistricting after the 2020 US Census changed a number of local districts.
Mike Thompson is running for re-election in what is now California’s 4th Congressional District, the new district closely mirroring the current 5th District which Thompson represents.
His opponent is Matt Brock, a water district operations supervisor based in Solano County.
Brock has a straightforward question for voters in the area Thompson has represented since 1998.
"Has your family life, has your life gotten easier or worse in the last few years?" Brock asked. "And then overall in the last 20 years? We're kind of in a status quo hold position right now, and we're doing the same thing. I hear everyone complain about how bad it is in California, and you know, I often ask, Why don't you change the leadership up?"
Thompson simply pointed to his record.
"We are continually making sure that the folks who interface with the federal bureaucracy are treated fairly," Thompson said. "We are constantly doing work for veterans, for social security recipients on immigration, on taxes. We just settled a case for one constituent who was owed seven and a half million by the IRS."
Brock said he feels otherwise about Thompson’s local focus.
"He's basically become a rubber stamp for Pelosi, for Biden, and for basically anyone pushing certain agendas," Brock said. "He's huge on the climate change issue. Those are kind of things that I would take a step back from."
Thompson noted his local support.
"I'm supported by every member of the board of supervisors, every sheriff, every district attorney, school board members, school superintendents, every mayor, council member, state legislator," Thompson said. "And that's because I have been able to deliver for my district."
Brock listed a number of top priorities.
"Inflation," Brock said. "I mean, obviously we need to do something to get that back under wraps. It's gone out of control. And I think that, you know, it's kind of like we just gave an 18 year old a brand new credit card. The feeling of spending money is kind of gone right now at 400 billion here, 700 billion here. Those used to be big numbers and people really used to open their eyes to that. Energy independence is my other thing. We've shut down pipelines that are quite frankly one of the cleanest way to transport any type of product anywhere. Instead, we're putting oil on ships and steaming across the oceans burning fuel the whole time."
Thompson acknowledged the economic concerns.
"Are we in some tough economic times right now? We most certainly are," Thompson said. "We're in a global pandemic. There is a global recession. The illegal and immoral invasion of Russia has exacerbated all of that. Everything from our ability to purchase fertilizer, to sell agricultural products, to import agricultural products, to have access to fuel supplies."
Brock, a 16 year veteran of the water industry, said nuclear power needs greater attention.
"There's a large push for cleaner energy and things to that and, and to take care of our environment," Brock said. "And I think the amount of hoops that we go through and the type of stewards that we are already with the environment is very good. Trying to produce energy using green sources. And there's pros and cons to, to that. And there's pros and cons to, to fossil fuels. We have the ability here to use nuclear power. It's kind of been a bad word for a long time to, to mention nuclear, but quite frankly, I mean, it is what powers our Navy. It is what gets our ships around the world to protect us and all other countries."
Thompson reiterated that he knows what residents of the district truly care about.
"I come home from Washington every weekend and I'm here during the district work periods," Thompson said. "I'm constantly out in the district meeting with folks, finding out what their needs and desires are and working to make sure that we facilitate that."
Thompson also touted his environmental and disaster relief accomplishments.
"Protecting over a million acres of habitat and permanently protecting that," Thompsonsaid. "Everything from the North Coast Wilderness Act to the Berryessa-Snow Mountain Wilderness Act. I was particularly successful in this last congress getting help for my constituents who were harmed by fires. I was able to get everything from increased funding for federal government share of cost to tax credits to help build new affordable units."
Brock emphasized border security.
"I don't know if we need a barrier, a huge wall or anything like that, but we definitely need some way to vet and, and check individuals that are attempting to, or entering this country legally," Brock said. Even as a father, I worry about it. The fentanyl deaths are way up and a lot of those drugs are coming from overseas, but they basically have an open door at our southern border and it's a free pass in."
Brock said he feels leadership changes are needed.
"I mean, he's been there since 1999," Brock said. "That's a, a very long time in my opinion. I'm just afraid that the world that we grew up in and myself and, and my parents and their parents even may not be around or we may not have the same opportunities in the future if we kind of continue down the road that I think we're leading to."
Thompson said he's confident he will continue to serve North Bay residents in the House.
"Well, I don't even know who my opponent is," Thompson said. "He has absolutely no presence in any part of my district. He has no support from anyone in my district. I think folks are pretty confident that I work very hard on their behalf and that's why they gave me 68% of the vote in the primary."