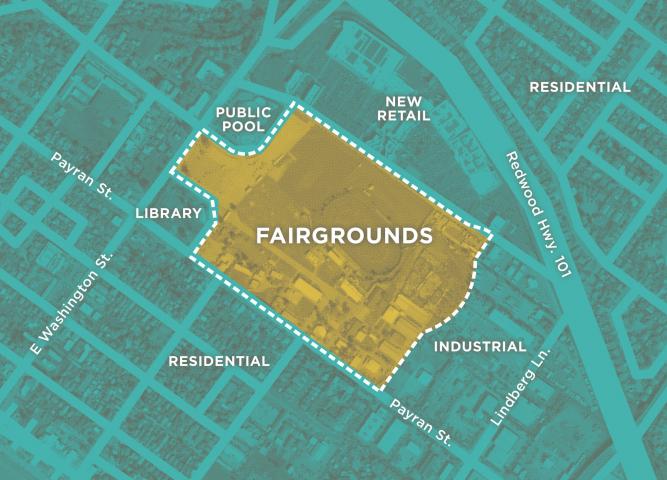 photo credit: Courtesy the City of Petaluma
Democracy was on the docket last night in Petaluma with a special meeting of the city council focused on the future of the city’s fairgrounds that stretched nearly 6 hours.
Deliberation and debate is the name of the small ‘d’ democratic game - and when it comes to deciding the future of Petaluma’s fairgrounds, there’s plenty of ideas to go around.
"If we tried to cover everything and include them in visions, we literally had about a hundred different things that could have been included," one panelist said.
The bounty of ideas for the site’s future all stems from the expiration of a 50 year lease agreement between Petaluma and the 4th District Agricultural Association. That's the group that organizes the annual summertime Sonoma-Marin Fair, and who has managed the fairgrounds since 1973.
Instead of automatically signing another half-century lease, Petaluma partnered with the nonpartisan nonprofit Healthy Democracy to convene a democratic lottery-selected panel to provide a new community vision for the grounds.
Members of the panel, who identified themselves only by first name, laid out the various visions.
"36 people with ideas all going at once, it was really pretty good," Brian, panelist 15, said.
He detailed the panel’s guiding premise.
"How might we use the city's fairgrounds property to create the experiences, activities, resources, and places that our community needs and desires now and for the foreseeable future?" Brian asked.
Those visions, just to name a few, included fair amenities like agricultural and livestock space, an evacuation center, space for a year-round farmers market, public green space, and a tribal cultural area.
Petaluma city council member Brian Barnacle noted the results of the community driven approach.
"Going into this, there was quite a bit of fear and rhetoric about a bunch of things that were going to happen to the site, carve it up, sell it off to developers," Barnacle said. "There was a lot of rhetoric around that, and coming out of this, we came out with a pretty clear mandate with five agreements for agriculture, keeping the fair, emergency preparedness, a farmer's market, and noise mitigation."
Petaluma Mayor Teresa Barrett assured that 20 of the fairground’s 55 acres will be set aside for fair and evacuation center uses. She said agricultural preservation must remain front and center.
"We're here because we are supporting those families that are farming and providing the food for this area because we want these people to stay in business," Barrett said. "We want our food to be local. We want these people to be successful. That is what Healthy Democracy came up with when they were talking about the number one thing here is agriculture."
The city of Petaluma will assume control of the fairgrounds in 2024.