Rallyers gather to remember those lost and push for greater change 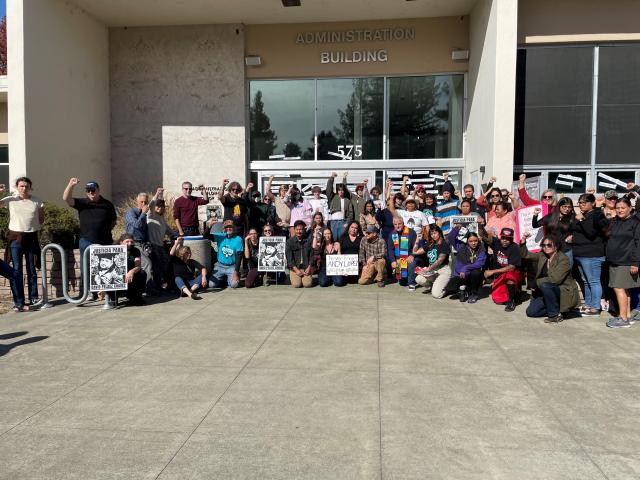 photo credit: Courtesy of KRCB/Noah Abrams
Since 1996, activists around the United States have rallied on October 22nd for a national day of protest against police brutality. This year’s day of protest saw around 60 people gather outside the Sonoma County administrative offices in Santa Rosa.
"No Justice! No Peace! No Racist Police!" Attendees chanted.
Many in the crowd were familiar to one another - long time veterans of Sonoma County’s activist community. Including a county commissioner on human rights, the subject of a high profile arrest, and family members of those killed by officers of local law enforcement.
"The way we can start to get a semblance of accountability is investigating these deaths and the law enforcement who are responsible for it," local police accountability activist, Kimi Barbosa, told the crowd.
Recent agreements meant to implement Measure P’s sheriff oversight was the focus of much ire, including that of Barbosa.
"Right now we need the Board of Supervisors to rewrite their letters of agreements to allow Measure P to be implemented," Barbosa said.
Rallyers left a reminder for county government staff to find this morning - taped to the doors and windows - the names of the more than 80 individuals killed by law enforcement around Sonoma County since 1994, including David Pelaez Chavez, killed by Sheriff’s deputies this summer.
Saturday also marked nine years to the day since the killing of Andy Lopez by a Sonoma County sheriff’s deputy - October 22, 2013 - the galvanizing tragedy which has spurred many of the efforts to increase oversight and accountability for law enforcement within the county.
"Cause we want Measure P Right?" Barbosa asked the crowd. "What do we want? Measure P! When do we want it? Now! What do we want? Measure P! When do we want it? Now!"
While activists in the community continue their calls for oversight and reallocation of resources from policing to social services, this week Santa Rosa, the only Bay Area city of over 125,000 people without an armored vehicle, is set to purchase a $350,000 upgraded model - using $320,000 from the State Asset Forfeiture Fund.