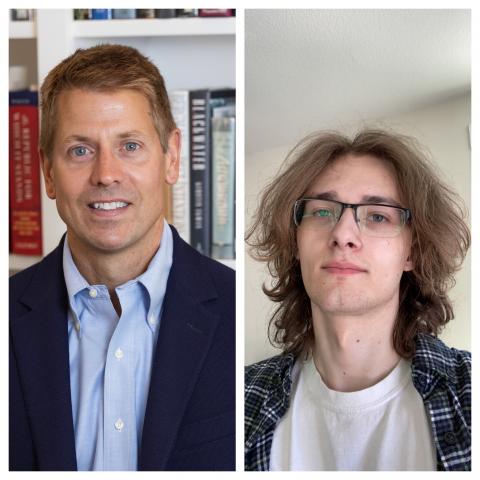 photo credit: Courtesy of KRCB/Noah Abrams
Next up in our ongoing election 2022 coverage, the race for the second district seat on the Santa Rosa City Council.
Mark Stapp is a member of Santa Rosa’s Design Review Board, an administrator at Sonoma State, and has served on the city’s Measure O oversight committee.
Mason Rossiter is a political science student at the Santa Rosa Junior College and works as a barista.
Stapp sees two major city issues as priorities.
"Homelessness, which of course is a top concern for many voters," Stapp said. "And also housing, which is a perpetual concern for residents of Santa Rosa and Sonoma County.
As does Rossiter
"Homelessness and housing," Rossiter said. "Homelessness is a massive humanitarian crisis; and then housing, which is kind of tied into that, but also a lot of other people have to deal with that."
Stapp said good governance and budgeting are also central issues .
"We have had a structural budget deficit for the last several years that's been covered up by one time funds," Stapp said. "Our public safety departments absolutely need to be funded. If anything, they are underfunded right now and I would particularly call out the fire department because of the budget issues. We're gonna have to look at the other programs that we're providing and figure out how we can be more creative in continuing to provide top quality services, but do so cost effectively."
Rossiter said he'd pursue policies to revitalize public life.
"I think it'd be really cool if we made City Bus fare free," Rossiter said. "This is something we did during the height of Covid. I'd really love for us to give another shot. What we've seen in a lot of cities that have already implemented free City Bus Fair is that it can empower a lot of lower income working class people to get around the city more easily. And then when they can do that, they can go to small businesses and places like that and patronize them, and then that ends up kind of spurring the economy."
Stapp has the backing of Representative Mike Thompson, Santa Rosa Mayor Chris Rogers, and the city’s firefighters union.
"I am looking forward to the chance to serve the community," Stapp said. "My wife and I and our supporters have been out walking every weekend so that we can listen to constituent issues, and that's been instructive. That's certainly helped shape my views of what the city priorities need to be."
Rossiter, who does not have a published list of endorsements, said what he lacks in experience is balanced by drive.
"I understand that I'm very young," Rossiter, 20, said. "I don't have a lot of traditional experience and that can be disconcerting to a lot of people and that's understandable. I've noticed so much discontent with City Hall and with how things are run. Someone like myself could really bring a new perspective, like someone who rents, someone who lives paycheck to paycheck. These are issues that affect me."