ELECTION 2022: Huffman and Brower on ballot for congressional district 2 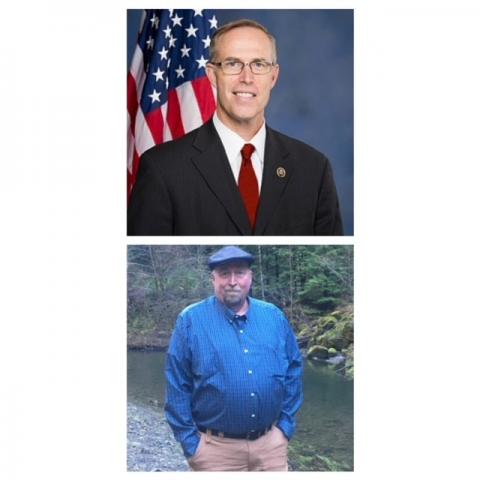 Jared Huffman (top) is being challenged by Republican Douglas Brower (bottom photo).
photo credit:
For our ongoing election coverage, we’re speaking to candidates in key local races. One of those is for the representative for California's second congressional district.
Spanning from the Golden Gate Bridge to the Oregon border, Jared Huffman has represented the roughly 700,000 residents of the second district in US Congress since 2013.
Here’s what Huffman has to say about his challenger on this year’s general election ballot:
"It's always interesting, every cycle, the kind of opponents I get," Huffman told KRCB News in a virtual interview this week. "Sometimes they actually run campaigns and other times it's like they're in the witness protection program and you never hear from.
Huffman is talking about Douglas Brower, the other candidate on the ballot. Brower did not respond to requests from KRCB News for an interview. His website says he and his family don’t feel their values are being represented in Congress, and that Brower aims to bring "biblical principles to governance."
In his candidate statement, Brower says “Enough is enough! Electing the same people over and over again expecting different/better results is insanity.”
Here’s Huffman’s take on that…
"It takes a few years to figure out how to do this job, believe it or not," Huffman said. "And also to build the seniority and the influence to really have an impact. So I, I feel in many ways, like I'm just figuring a lot of that out and the past two years was just incredibly productive for me."
Huffman says he considers his work in the area of climate change to be among his top accomplishments.
"I contributed in a major way on the two committees I serve on: Transportation and Infrastructure and the Natural Resources Committee as well," Huffman said. "But I'm also on the select Committee for the Climate Crisis, and we had a major hand in shaping some of the climate actions that we're finally beginning to see at the federal level.
KRCB News asked Huffman to give a concrete example of those actions.
"Well, the tax credits, but also some of the resiliency provisions, the grid modernization and upgrades, the electrification of transportation and incentives to really drive the sort of industrial policy that we need to shift in this country in order to decarbonize. All of that was in the climate action plan that the select committee I serve on crafted last year actually, and it very much laid the groundwork for some of these provisions."
In the June primary, Douglas Brower narrowly beat out three other Republican candidates and a Democrat to get nine percent of the vote in District 2, which includes portions of Sonoma and five other Northern California counties. Huffman received 69% of the vote.