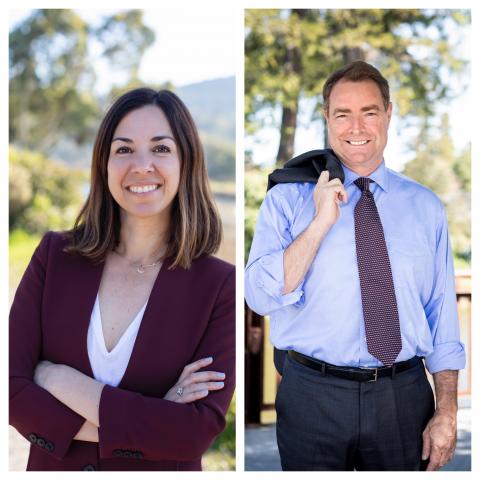 photo credit: Courtesy of KRCB/Noah Abrams
The Sonoma County Elections Divisions started sending out 2022 general election ballots in the mail on October 10th. Over the coming days, besides stories on statewide propositions, we’ll be airing interviews with local candidates. KRCB News spoke with the two candidates running for the State Assembly's 12th District seat.
Sara Aminzadeh is an environmental lawyer and Coastal Commissioner. Damon Connolly is a Marin County supervisor and former state deputy attorney general.
Aminzadeh strongly emphasized environmental issues.
"Two of the first things I would focus on in the legislature would be climate action, accelerating our timeline and urgency around decarbonization efforts, and then water supply," Aminzadeh said.
So too Connolly.
"Advancing our fight against climate change and the impacts it's having on our local communities around wildfire prevention, drought," Connolly said. "Affordable housing is an issue I work extensively on; solving the homelessness crisis."
Aminzadeh said she can continue to deliver concrete benefits.
"I had the honor of serving on President Biden's infrastructure campaign advisory committee, so I had an early role in the shaping of the infrastructure funds, in which I believe Sonoma and Marin should access to improve our water security," Aminzadeh said.
Connolly pointed to his deliverables as well.
" [I] had the opportunity at the ground level to really get in on this innovative program called Community Choice, with Marin Clean Energy and Sonoma Clean Power, there's now 208 such programs in communities," Connolly said. "I think we can push those kind of solutions even further."
Aminzadeh has the backing of the California Nurses Association, Environmental Voters, and Representative Jared Huffman.
"Now is not the time for more of the same," Aminzadeh said. "Let's send a bold environmental champion and a woman to Sacramento to fight like a mother for our kids' future."
Connolly counts State Treasurer Fiona Ma, California Teachers Association, the Press Democrat, and Marin Independent Journal as backers.
"I'm doing the work, we're getting results, and if you send me to Sacramento, I will be that local voice for our communities," Connolly said.