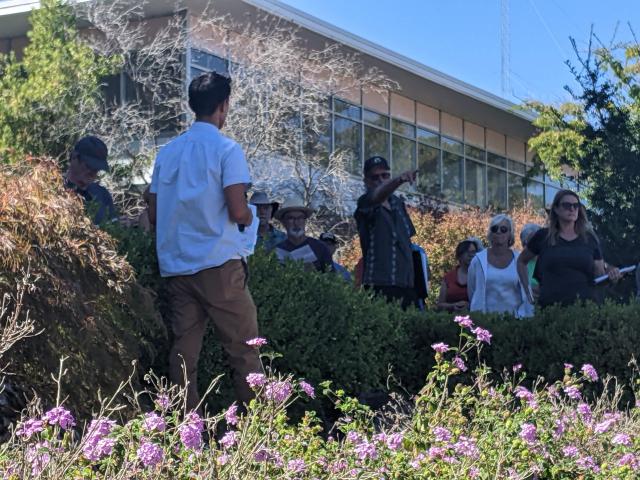 Interested members of the public on a recent tour of the SDC site
photo credit: Marc Albert/KRCB
Sonoma County officials appear to be ploughing ahead with bold re-use plans for the sprawling Sonoma Developmental Center.
A total of 15 pages of revisions to the site's specific plan and a 2,500+ page environmental impact report were released to the public Tuesday. The county's planning commission is scheduled to consider the documents a week from Thursday, October 27th.
The latest iteration shows significant concessions to environmental groups, but no compromise with neighbors demanding significantly fewer housing units. A proposed road connecting the site with state highway 12---which also raised ire in the community, remains in the plan, at least for now.
As before, the specific plan calls for a thousand housing units, two hundred and eighty three of them affordable. And the infrastructure to support enough business and nonprofit activity to generate nine hundred jobs.
The number of units, is simply too much according to more than a few neighbors making their cases at a series of public input sessions.
Some called for more than halving the number of dwellings--arguing congestion is already an issue in the vicinity.
The county argues that when SDC operated, roughly 3,000 people commuted to jobs there.
The potential for wildfire also raised concerns with several neighbor predicting fatalities in an evacuation. A proposed road connecting the campus with State Route 12 would alleviate delays in an evacuation---the county claims travel times during an evacuation would be similar to peak commute times with the road, but neighbors and environmental groups have raised concerns it would interfere with wildlife. The plan suggests keeping the proposed road closed to vehicular traffic, except during an evacuation.
The road will almost certainly be a flashpoint.