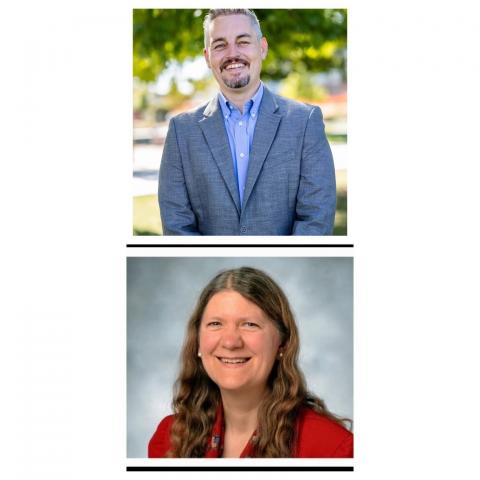 photo credit: Courtesy of KRCB
The Sonoma County Elections Divisions started sending out 2022 general election ballots in the mail on October 10th. Over the coming days, besides stories on statewide propositions, we’ll be airing interviews with local candidates.
KRCB News spoke with the two candidates running for the 6th District seat on the Santa Rosa City Council.
Engineer and former Santa Rosa city council member Veronica ‘Roni’ Jacobi is running against Jeff Okrepkie, founder of the nonprofit Coffey Strong and member of Santa Rosa’s Planning Commission.
Jacobi's message remains the same.
"Climate change," Jacobi said. "That's the big thing that I know that I'm best suited for."
Okrepkie said he is focused on persistent municipal issues.
"Housing, homelessness, and budget and finance are the three that we need to start tackling fairly heavily in the immediate future," Okrepkie said.
Jacobi pointed to a number of solutions for climate and homelessness issues.
"I would love to have [the] city have all of its power use be evergreen, which is the clean source," Jacobi said. "I would like to have us only buy electric vehicles for the city fleet unless there's really good reasons and I'm excited about single room occupancy. I want to let tiny homes be legal."
Okrepkie said there are concrete opportunities to address homelessness and housing.
"One of the things I'm really excited about is the newly passed Cares Court," Okrepkie said. "It's easier to roll out here because we're smaller in stature, but we are not smaller in terms of the crisis itself. And then in terms of housing, are there ways to spur development with a focus on making it more cost effective for smaller homes?"
Jacobi, who has the backing of the Sierra Club, said her experience as a foster parent pushes her to fight for change.
"Climate change, we need to solve it and I'm ready to solve it," Jacobi said.
Okrepkie has the backing of retiring District 6 council member Tom Schwedhelm, Mayor Chris Rogers, and Santa Rosa Professional Firefighters.
"I've had the opportunity to community organize for the right reasons," Okrepkie said. "And if I get elected, it's something I can continue to do."