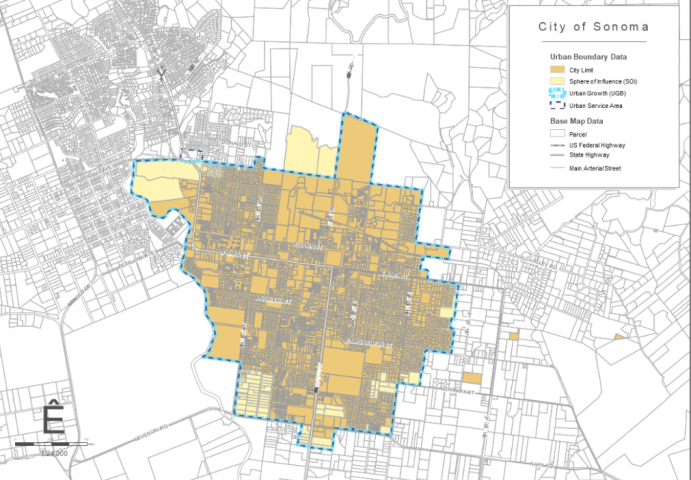 photo credit: County of Sonoma Local Area Formation Commission
The City of Sonoma is being pushed to expand, but less forcefully.
A final report prepared by Sonoma County's Local Area Formation Commission...also known as LAFCO [laugh-coe]…..is scheduled for public release today. It recommends Sonoma swallow several unincorporated 'islands,' a few peripheral areas that have already been built up, a regional park and a preserve.
The commission dials back language in an earlier draft report, changing near demands into recommendations.
LAFCO advises county government on the efficient delivery of services by recommending boundary changes to municipalities and special districts.
The commission is now asking Sonoma's city government to consider annexing Denmark Street and Garry Lane, the Four Corners area and Harrington Drive. Also included is Train Town, considered an 'island' as it is surrounded by the city.
The draft report urged those actions be taken. The areas already receive certain city services.
Additionally, the city is being asked to review its long-term plans for both Maxwell Farms Regional Park and Montini Open Space Preserve, and consider either annexing, or removing them from Sonoma's quote "Sphere of Influence."
At a city council meeting earlier this month, officials appeared to welcome the recommendations. Though concerns were raised whether enough tax revenue would be generated to pay for services and infrastructure.
Councilwoman Sandra Lowe says annexation is a long-standing issue.
"There's a lot of talk about extending the city limits into the Springs, and making 'one-Sonoma,' something that I'm partial to in many ways."
The council voted to formally send the issue to the city's planning commission for further study next year.
Sonoma city officials anticipate a lengthy process, and a duel with the county over the proceeds of sales and hotel taxes in areas that might be annexed.