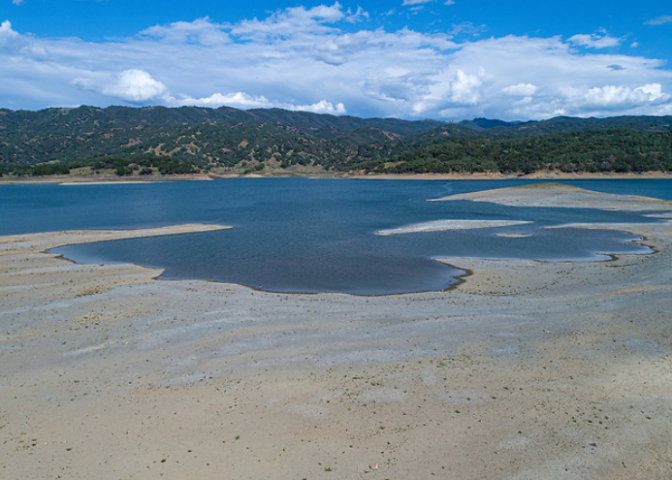 photo credit: California Department of Water Resources
Water supplies are dipping and the outlook for the coming rainy season is iffy at best. That's the main takeaways from Thursday's online drought town hall held by Sonoma County.
Officials say Lake Sonoma stands at forty-four percent capacity.
Brian Garcia, with the National Weather Service, said precipitation dropped by last month's early storm has mostly evaporated.
"We are still very, very dry. One good offshore wind event and we could have a significant wildfire."
Garcia delivered a sobering forecast. He said La Nina conditions, which tend to mean drier than average winters locally, are expected to persist, likely into February. He said much depends on when it lifts.
"If we can get out of La Nina early enough...we can actually pick up some precipitation once we get towards February and potentially a 'miracle March" or an 'amazing April."
The long term outlook, due to global warming, will bring new challenges.
"We'll get more extreme droughts, longer, deeper, heavier droughts. Hotter summers. We could even see some colder winters mixed in there, and we can see some really, really big floods as well," he said.
The event also broached aid programs for those whose wells have failed. While a state program may be helpful, a federal one has income eligibility levels set so low, few locals would qualify.
Vineyard manager Brad Petersen outlined multiple efforts his Silver Oaks Cellars has taken to reduce water usage. His methods have meant he can irrigate an acre of vines with a quarter to a half acre foot of water annually---about what a small family would use. He says grapes aren't necessarily the problem.
"If there were other crops we could grow in Sonoma County, and make a living at doing that, believe me, as farmers we would be doing that. That's the reason a lot of the acreage has transitioned out of apples, out of prunes, out of crops that were here before, is just that they've just become to the point where you can't make a living as a farmer doing that."