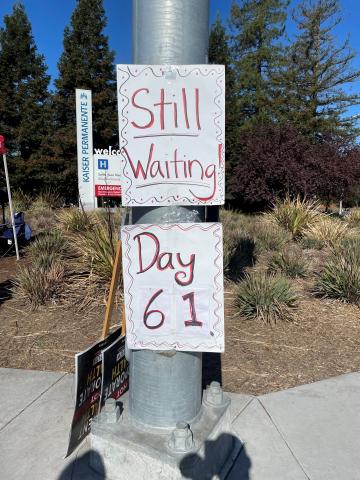 photo credit: Courtesy of KRCB/Noah Abrams
Mental healthcare workers at Kaiser Permanente are marking two months on strike across Northern California today.
"We're here for the patients, not for ourselves," said Christine Naber, a neuropsychologist at Kaiser in Santa Rosa and member of the National Union of Healthcare Workers. She said the ongoing strike is remarkable.
"It's the largest mental health strike in US history," Naber noted. "We've been out for two months and the reason that we're out on the line is not for benefits, it's not for wages, it's for basic justice around mental healthcare access."
Addiction medicine specialist Ray Messinger said the union’s main goal is unchanged.
"They've offered us basically only wage increases, and we've across the board, turned them down," Messinger said. "They time and time again, refuse to kind of acknowledge or address what we would believe to be the core issue, which is return access, the ability of somebody to have an intake and then come back and be seen in less than four weeks time."
In a statement, a Kaiser spokesperson said the company has offered to make indirect patient care time 20% of therapists’ workloads. They also said the company and union have agreed to third party mediation and that over 70% of therapists have returned to work despite the unresolved contract.
Messinger said a core union demand is a change in the ratio of intake to return appointments. He said decreasing return waits is necessary for effective treatment.
"The solve for substance use disorder is long term therapy, and once you kind of get to that every three week, every four week range, the efficacy of that long term therapy all of a sudden is really questionable," Messinger said. "So it's about giving them standard care."
Naber said this moment is a crossroads.
"This is us standing up and saying mental healthcare is broken, and Kaiser has an opportunity really to create a model that can really make an impact," Naber said.