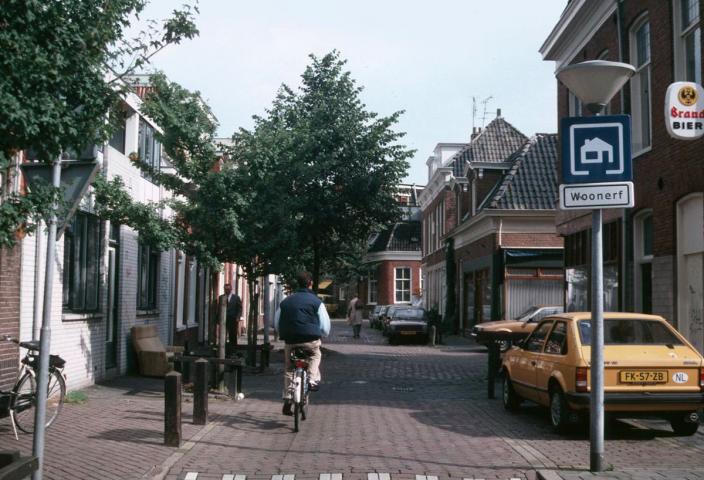 photo credit: Courtesy of Erauch/Wikimedia
For now the cannabis shops are the main thing Cotati and Amsterdam have in common, but soon enough Cotati’s neighborhoods may look a lot more Dutch.
"The sum result of all of this is the creation of a series of outdoor living rooms," Cotati planner Autumn Buss said.
The living rooms Buss is talking about: Woonerfs. A very Dutch word and design. They are the pedestrian-centric residential streets that dot the Netherlands and blur the lines between front yards and roads.
Buss laid out the Woonerf concept.
"A woonerf is an internal driveway within a development used as a multimodal multi-use shared space where priority is given to pedestrians and bicycles," Buss said. "Motor vehicles are considered guests in a woonerf, and as such are subject to traffic calming and reduce speed limits in order to force drivers to reduce travel speeds and drive with caution so that all users feel welcome and safe."
Though woonerfs in the Netherlands are often public streets, Cotati’s woonerfs, at least for now, will be confined to the internal streets of private mixed use and housing developments. Similar to Matteri Circle off East Cotati Avenue.
Buss also explained the defining features of a woonerf.
"Visible entrances, physical barriers to slow traffic down, continuous paving without curb breaks and landscaping and street furniture are typically present in a woonerf as well," Buss said.
Cotati council member Ben Ford said the introduction of woonerfs places Cotati in a unique position.
"It seems like we're kind of on the cutting edge in the US here in talking about this, so I think it's important we get this right because other people are likely to copy us," Ford said.
Mayor Mark Landman sees them as a win-win.
"I think it's that wonderful combination as something that makes a better living space for people while at the same time can be done as relatively cost effectively as possible for a developer," Landman said. "So it works in both ways that everybody involved in building homes, cities, and developers could look at it."