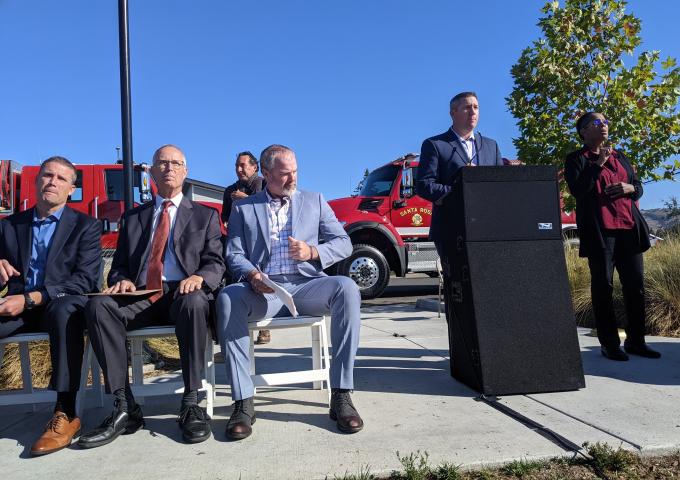 Elected leaders Chris Rogers, James Gore, Jared Huffman and Jim Wood flanked by an ASL interpreter
photo credit: Marc Albert/KRCB
As the fog cleared Saturday morning, elected leaders, firefighters, and local residents gathered to mark the 5-year anniversary of the Tubbs Fire.
Other than a few scars on the pavement, Santa Rosa's Coffey Park looks like a recently completed subdivision, trees not yet casting much shade.
After igniting north of Calistoga the night before...on October 9, 2017, pandemonium roared over the ridge as burning debris showered from the sky.
Supervisor James Gore acknowledged failure.
"There was a lot of things that didn't go right, five years ago. There's a lot of things that we, as government, and we as individuals had to take an account for. There was a lot of readiness that wasn't where it needed to be. Or systems that weren't tried and tested. And we, as public officials, as servants, have to tell you once again, I'm sorry."
Her voice cracking, Supervisor Susan Gorin honored the lost.
"Too many of our community members perished, because they were physically unable to evacuate. Jessica, we are thinking of you, talking on your phone with your mother when she perished at Journey's End. Someone at Coffey Park perished, also, physically disabled, could not evacuate."
Amidst the devastation, Assemblyman Jim Wood says, he found hope.
"I knew we were going to be OK when, at the fairgrounds, where thousands of firefighters roared in, there was this banner and it will forever be etched in mind, that I saw on a fence there, 'the love in the air is thicker than the smoke,' and that really epitomizes our recovery and how we move forward."
Again and again, the danger, and inevitability of a reoccurrence was raised. Astonished, Wood says some remain oblivious.
"I'm still shocked that even areas in the county and near, in the neighborhood that I live, there is one piece of property that is beautifully taken care of, and the guy next door hasn't done a damned thing. We are only as strong as our weakest link, and if a fire starts in that neighborhood, the guy who did the right thing may lose his home because the guy next door didn't."