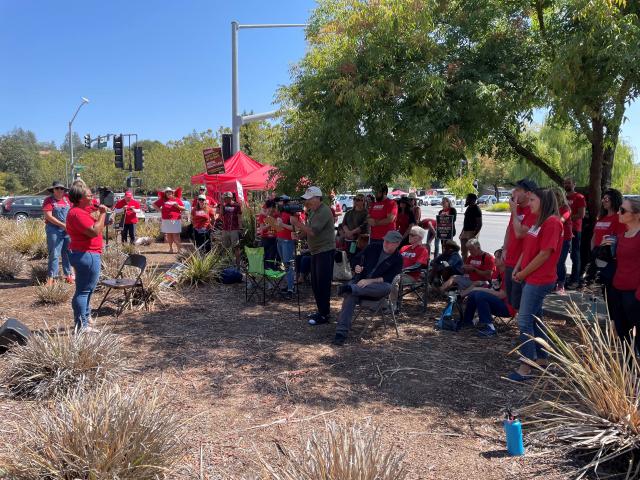 photo credit: Courtesy of KRCB/Noah Abrams
Mental healthcare staff at Kaiser Permanente in Santa Rosa remain on strike, holding out for better working and patient-care conditions. After nearly two months some Kaiser employees have returned to work, unable to continue on without pay.
Alexis Petrakis, a mental healthcare worker at Kaiser's Santa Rosa facility, and member of the National Union of Healthcare Workers, said those who remain on the picket line are going strong.
"We're feeling good as a community and really strong in our convictions," Petrakis said. "We really have a very unanimous and very cohesive commitment to the values and the intention behind the strike."
Worker demands, according to Petrakis, remain the same.
"The balance of the intakes to what's called return appointments; we're asking for a shift so that we have more return appointments," Petrakis. "We're kind of focusing on making sure we get to see people. Another thing is an increase in what's called indirect patient care time, and that's the time that we spend doing everything related to someone's care that's not face to face."
She said that would mean better patient care.
"That's making sure that we're not just focusing on the influx of people, that we're actually focusing on the care that's provided during their treatment," Petrakis said.
In a written statement, a Kaiser spokesperson said 65% of its therapists across the Northern California region have returned to work, and that the company has proposed to increase indirect patient care to 25% of therapists' workload.
The company also said the union's demand for more hours of indirect care per week would “reduce the number of appointments we currently have by more than 2,500 every week."
Petrakis said the quibbling over small changes to patient care could lead to even worse outcomes.
"You're going to be missing a lot more face to face appointments when you have more Kaiser therapists leaving," Petrakis said. "I see about 30 patient hours a week if I just leave, that's a lot of patient hours that are missed."