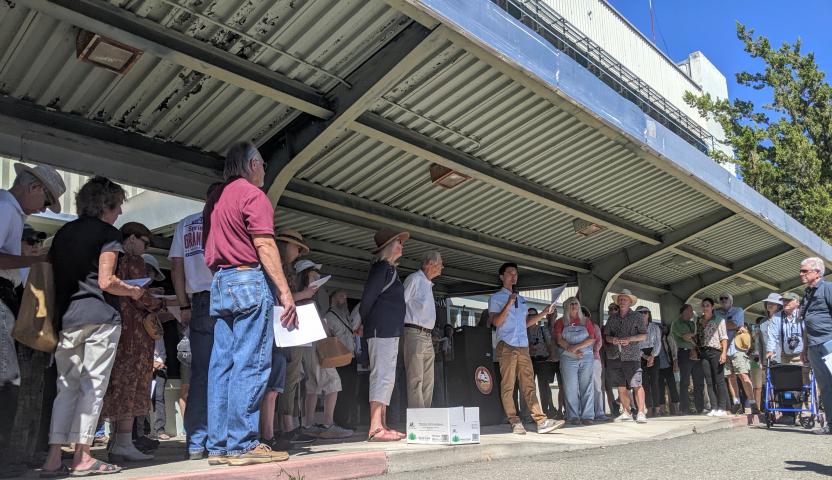 Brian Oh explained re-use plans to commissioners and scores of interested and concerned neighbors
photo credit: Marc Albert/KRCB
Roughly one hundred people showed up at the Sonoma Developmental Center Thursday, where the county's planning commissioners held an on-site meeting and walking tour of the shuttered 19th century campus in the Sonoma Valley. Officials continue refining re-use plans for the nearly one thousand acre site.
Brian Oh, with Permit Sonoma, says much of the feel of the bucolic property will remain. He says any redevelopment will be within a quarter mile of it's formal, 'central green.'
New buildings would rise in the footprints of structures deemed too expensive to restore, he said, maintaining broad swaths of turf between streets and buildings.
"Where there's existing buildings we're pulling back from that wildlife corridor to make sure that there's some degree of separation."
Oh said traffic concerns could be overcome with active management and protected bikeways and pedestrian paths.
Preservation of undeveloped areas is a chief concern among some local environmental groups and neighbors, with traffic congestion, density and a planned hotel also flashpoints. Listening in, local resident Caroline Hipkiss says retaining the property's open space and historic buildings are her strong preference, but there's also room for homes.
"Obviously people have lived here over the years and there are ways to accommodate, but it sounds like a lot of people are trying to cram a lot of people into a small space. It has never accommodated that many people in the past, and I think that's a concern just because it is a very rural feeling area and not that nothing should change ever, because that's ridiculous."
According to county officials, the campus needs $100 million in repairs and upgrades to infrastructure, including water, sewer and road systems. The three-story brick main building, the campus's seismically vulnerable focal point--earmarked for preservation, alone needs $30 million worth of earthquake strengthening and general renovation.
The fact that those costs must be borne by the project itself, has spawned controversy. County planners say any re-use must be large enough, with the right mix of housing-business and a hotel for it to work financially.
Many locals are advocating for a much smaller vision. Lauren Bjelde (bell-dee) of Agua Caliente said the site could help address one of the region's top challenges.
"A lot of younger folks, my age, young 30s, late 20s are moving back here---that grew up in Sonoma County---and there aren't a lot of affordable housing situations for them and opportunities. Because they want to come back home, they want to raise their kids with their parents and raise their families here...I know it's so precious to keep it just tight and beautiful, but it's, it's growing, and I think we have to grow with it."
The feeling is far from unanimous. Vivian Hoyt of Glen Ellen is adamant that the proposal as it now stands, is far too large, and a hazard.
"They're talking about 1,000 homes, that's easily 2,000 more cars on the road, and if there was a fire and we were all trying evacuate at the same time, there's already gridlock on our roads as it is, and you add that many cars, it's going to be a disaster. People will die. My daughter nearly died in the Coffey Park fire because she got caught in traffic and couldn't escape, so it's real for me."
She said she would not support widening any roads to ease egress.
A final environmental impact report and final specific plan are scheduled for release this month. Hearings before the county planning commission and board of supervisors are expected to follow in November.