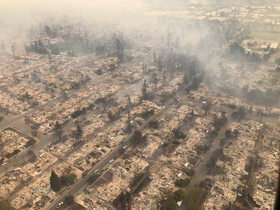 Santa Rosa's Coffee Park neighborhood after the 2017 Tubbs fire..
photo credit: Wikimedia Commons
Former PG&E executives and directors have settled a lawsuit for $117 million in damages caused by the utility in connection with North Bay fires and the Camp Fire in Butte County, which was the deadliest fire in California history, the PG&E Fire Victim Trust announced Thursday.
After more than a year of negotiations and on the eve of a trial, PG&E settled in May of this year and terms were finalized in July.
Lawyers for the plaintiffs say this is one of the largest settlements of its type in the U.S. The Fire Victim Trust was created by PG&E after it declared bankruptcy in 2019. The trust was put together to pursue claims against executives and directors at the company preceding the fires.
Attorney Frank Pitre of the law firm Cotchett, Pitre and McCarthy said the funds will be used to satisfy claims filed by victims of fires allegedly caused by the utility.
The trust has so far disbursed $4.9 billion to fire victims.
Executives and directors of PG&E were accused of poor safety oversight before the 2017 blazes.
The North Bay fires destroyed large areas of Sonoma and Napa counties and killed at least 44 people in 2017. The trust alleges that PG&E should have cut off power to the area sooner than it did to prevent the fires.
In 2018, The Camp Fire killed 85 people and decimated the entire town of Paradise. According to the trust, this fire was caused by failures to keep up with and oversee aging equipment and infrastructure.
"The agreement is consistent with the terms outlined in PG&E's Chapter 11 plan of reorganization, which is overseen by the bankruptcy court," said a spokesperson for PG&E about the settlement. "[It} is another step forward in PG&E's ongoing effort to resolve issues outstanding from before its bankruptcy and to move forward focused on our commitments to deliver safe, clean and reliable energy to our customers, and to continue the important work of reducing risk across our energy system."