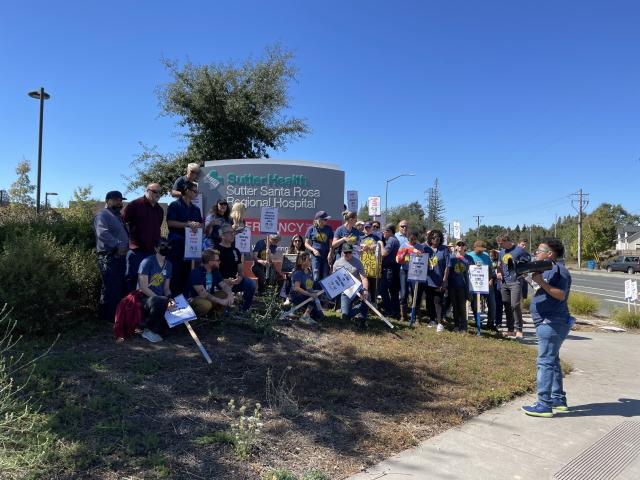 photo credit: Courtesy of KRCB/Noah Abrams
Fall has officially begun with perhaps another “Strike-tober” ahead as healthcare workers at Sutter Heath in Santa Rosa started early in their fight for a new contract.
Chants of "We’re on strike!" came from the lab scientists, pharmacists, social workers, and other ESC’s, engineers and scientists, at Sutter Health in Santa Rosa.
While mental health workers at Kaiser in Santa Rosa enter their seventh week on strike, Sutter’s ESC’s picketed for the first time Monday. That’s despite, according to Sutter, the intervention of a federal mediator, and a willingness to bargain in good faith by the healthcare company.
Josh Schoeneman, a lab scientist and member of the bargaining team, who has worked at Sutter for eight years, said after 14 months of contract negotiations, the strike is over two core issues.
"We're focused on respect and and patient care," Schoeneman said. "So we want to see conversation around staffing levels to make sure that we're doing the best for patient care and the community."
In a written statement, a Sutter spokesperson said the priority remains “providing safe, high-quality care to…patients."
LaCrystal Barrett, a social worker with 19 years experience at Sutter, said the strike is not just for those on the picket line.
"My biggest concern right now is retention, keeping the people that we have and recruiting people who come behind us, and what we want to see is fair wages that those that come behind us are going to be able to get the right pay that they rightfully deserve," Barrett said. "And so if one fall, we all fall."
Max Bell-Alper with North Bay Jobs with Justice said the striking workers are not alone.
"In the first six months of 2022, there has been over 180 strikes in this country involving nearly 80,000 workers," Bell-Alper said. "That is a record that is happening right now, that you are a part of. You are a part of that history."