After a decade of resistance, Sebastopol relenting on SmartMeters 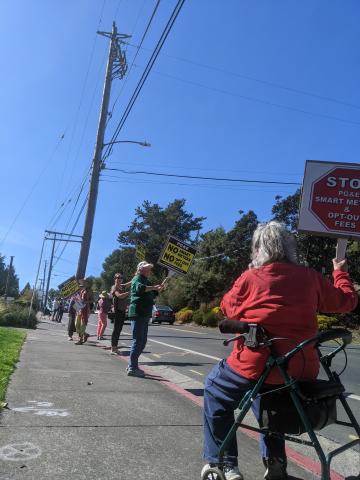 Activists decry PG&E's roll-out of SmartMeters in Sebastopol, say health impacts may be severe
photo credit: Marc Albert/KRCB
For nearly a decade, propelled by activists concerned about long-term exposure to certain frequencies of radio waves, the City of Sebastopol has delayed the roll-out of new, high-tech utility meters. This week, years after state regulators ruled municipalities had no jurisdiction and couldn't block them, Pacific Gas and Electric began installing them. That's left some locals with a mix of fear and outrage.
Barely two dozen people turned out Tuesday afternoon, but enthusiastic honking from passing drivers suggests more widespread concern about exposure to radio frequency radiation.
Standing on Healdsburg Avenue, activist Angela Ford said the city's apparent capitulation after a long struggle has left her with deep sadness.
"This represents the loss of community's abilities to control their environment and their future."
City Manager Lawrence McLaughlin, in an email, said "presently, the city of Sebastopol does not have an official policy with regard to this on-going deployment." He said the city is not currently considering any legal action. An earlier prohibition against installing them, with a $500 fine, is no longer in play.
PG&E spokeswoman Deanna Contreras confirms the utility began replacing meters Monday---but only for residential and business customers who have not opted out. She said twenty-two hundred and fifty homes, and four hundred businesses, still had analog meters.
Considered crucial for demand pricing and reducing PG&E labor costs, the meters transmit usage information to central computers, obviating the need for meter readers.
But activists in Sebastopol and elsewhere remain concerned about health impacts. A decade ago, the California Public Utilities Commission began allowing people to opt-out---for a seventy-five dollar one-time fee, plus a ten dollar monthly surcharge for three years. Pamela Gentry, one of the organizers of this week’s picketing says, that's unreasonable.
"Any charge to opt-out is unreasonable because EMFs are bad for our health and there's many people who are extra-sensitive to them and they're extremely serious for their health. It's like an extortion racket."
McLaughlin, the city manager, said company officials requested and held a meeting with him Monday. He told KRCB in an email that he relayed community health concerns, but the meeting was in no sense, a negotiation or similar.
Those living in apartment buildings and trailer parks, which made up most of those waving to traffic Tuesday, are most concerned with clusters of meters grouped together tracking usage in nearby units.
Patty Hiller said counted sixty-five of them within forty paces of her home.
"What will become of me? That is just too much radiation for a senior person to deal with."
That's a fear shared by Dorothy Schwartzberg. Like many she noted that personally opting out won't alleviate dangers unless one's neighbors opt-out too.
"On my wall, there are twenty-four, twelve gas meters and twelve electric meters. When they pulse, they are going to go through walls, through my apartment, into other apartments, and I am going to suffer some very strong health effects. When people out-out, people who don't opt out will have their meters going everywhere, we're going to get fried, so to speak."
PG&E's Contreras says quote "SmartMeters are not harmful, transmitting relatively weak radio signals," likening them to baby monitors.