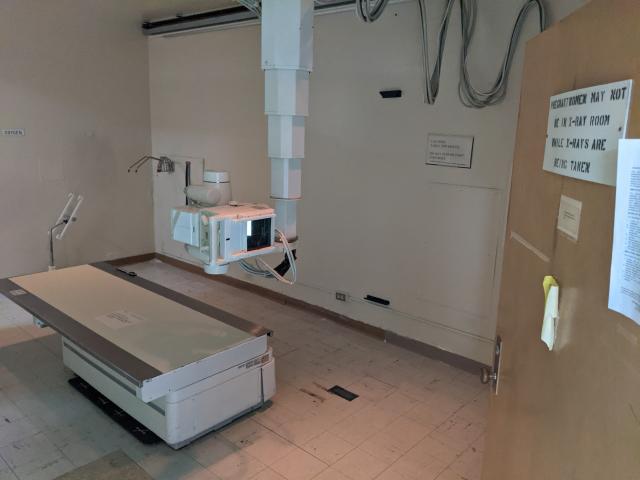 X-ray exam room at the shuttered hospital at SDC
photo credit: Marc Albert/KRCB
There's a new subplot in the on-going drama over re-use of the Sonoma Developmental Center, the shuttered state facility for the developmentally challenged in the Sonoma Valley.
County officials say it won't impact the timeline. A final Environmental Impact Report and Specific Plan are still due by December thirty first, but officials will have another year to study devoting part of the roughly one-thousand acre campus as a 'climate adaptation center.'
Last week the state Coastal Conservancy's board of directors approved a quarter million dollars for Permit Sonoma to ponder the optimal size and scope and how and whether it would be a good fit for the SDC.
Bradley Dunn is Policy Manager at Permit Sonoma.
"What this does is, it is looking at some of the institutional space that is already built into the plan, and seeing if the Coastal Conservancy would be a good tenant for that space."
The county's draft plan aims for facilitating the creation of about 900 jobs on-site. If it prevails, the center could account for some or most of those jobs.
The coastal conservancy's resolution calls for identifying public and private entities that could provide financial partnerships.
While such research is normally the purview of universities and federal Department of Energy laboratories, Dunn said the center would assemble more hands to confront what he called an existential crisis.
"Having multiple folks working on climate adaptation and resiliency is critical."
Excluded from the study would be a comparison of vehicle miles travelled if such a center were established at an existing institution, such as Sonoma State University or UC Davis.
Dunn said the study will explore numerous options.
"...A university, it could be a climate change adaptation center, it could be a 'maker' space, it could be a bunch of different things, and that's the idea behind it."