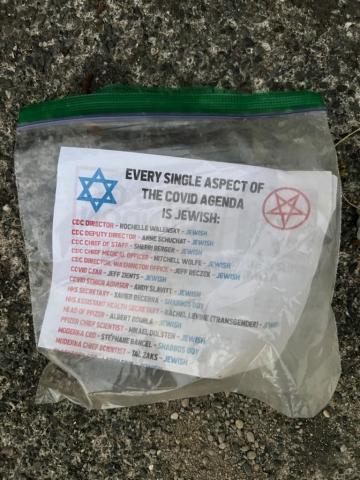 One of the flyers left at homes in eastern Santa Rosa Friday morning
photo credit: Marc Albert/KRCB
Dozens of residents in eastern Santa Rosa awoke Friday morning to leaflets left at their homes overnight blaming followers of Judaism for the COVID pandemic. It's the latest flyer drop possibly linked to a Petaluma man, who operates an anti-Semitic conspiracy website.
The flyers, placed on porches driveways or in yards---placing them in mailboxes is illegal---state "every single aspect of the Covid agenda is Jewish," followed by a list of public health, political, pharmaceutical company and banking officials each designated either Jewish or 'Shabbos Goy,' a Yiddish term for a non-Jewish person hired to perform tasks forbidden to Jews during the Sabbath. It's followed by the URL of the anti-Jewish webpage.
Sergeant Chris Mahurin with the Santa Rosa Police said the incidents were under investigation as a possible hate crime. He said technicians had dusted for fingerprints and were contacting community members for any surveillance video. He said Santa Rosa Police had received at least twenty calls.
Claudia, a local resident who received one of the leaflets, and did not want her last name used, said she was initially unnerved.
"My first though was maybe I don't want to put up my Chanukah lights in my front window this December."
She said she felt less singled out after noticing the flyers around her neighborhood.
The flyers seem to test the limits of allowable speech, avoiding direct calls to action. Claudia said she noticed a disclaimer of sorts.
"I just read the flyer more carefully, and at the very, very bottom it says, 'these flyers were distributed randomly, without a malicious intent,' I mean, that's the opposite of I think of what we're all feeling right now." 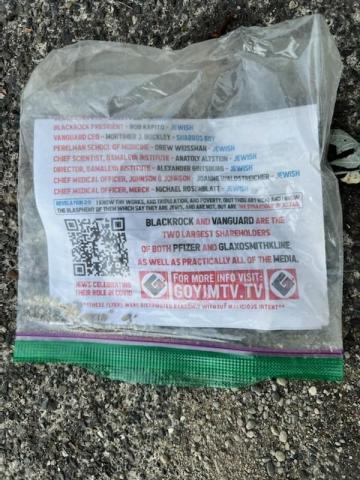 photo credit:
Rabbi Mordechai Miller, of Beth Ami, a synagogue in the neighborhood, wasn't exactly sure how to react.

"The older I get, the less I seem to understand the psychology behind this. What do people gain from this? But, I think there's a general atmosphere in the country, if not in the world, that seems to have moved away from understanding that it's all about kindness."
Miller said the flyers recycle ancient tropes.

"It's not new, it's old, it's tired, it's been proven to be foolishness, and unfortunately a lot of damage can take place with regards to foolishness."
As his congregation prepared to observe Rosh Hashana, the Jewish New Year which began at sunset Sunday, Miller called for solidarity.

"The truth is, there's so many minorities in America that are facing this kind of bigotry and hatred, that I think this is actually a call for us to unite and to be together and to realize that we all share similar kinds of experiences," he said